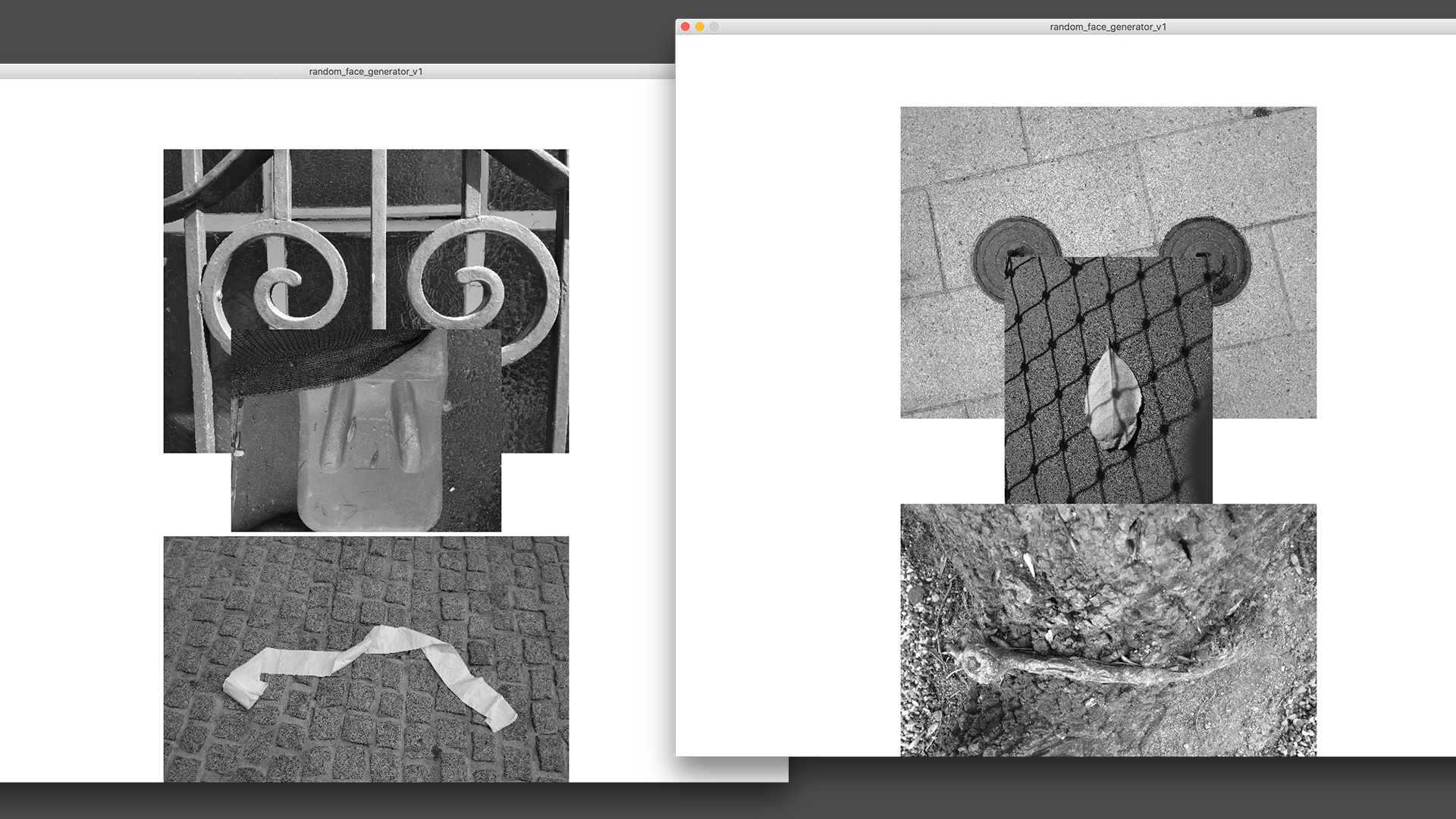 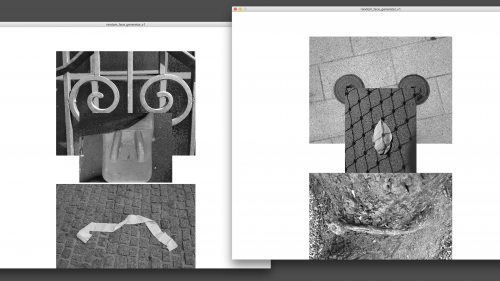 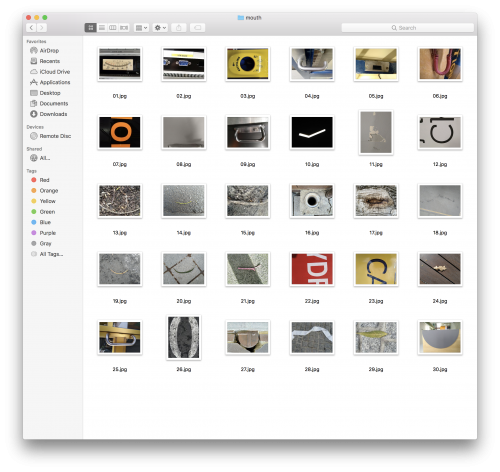 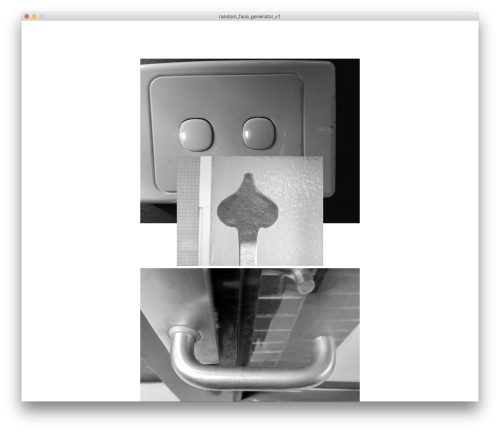 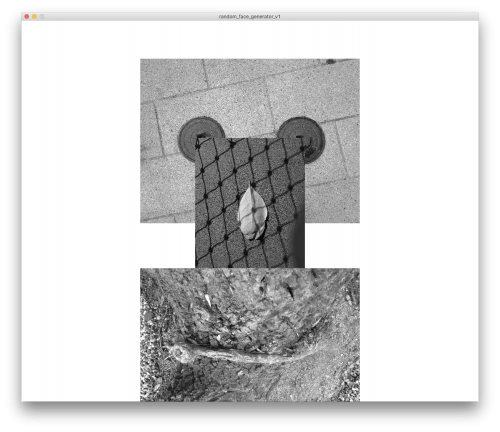 Last week, Kate and our APD class played this little game where we had to place blu-tack eyes on random objects around the MAGI Studio to give new meaning to them. After hearing Matt talk about 'forces' in his presentation, which was about establishing a system or framework that was open, dynamic and relational to generate content, I had this idea about generating faces from found objects.

The concept of found faces is not new. The book Focus: Found Faces: Your World, Your Images, is a photobook compilation of "faces" found in unexpected places all around the world. Likewise, Faces in Places, is a blog that also compiles these found faces. The point of difference in my response is that I'll be randomly generating the face through compositing three different types of photos - eyes, nose and mouth - much like the facial composite tools police use to sketch suspects' faces.

This technique was inspired by the "reassembly" technique from Surrealist practice, where Surrealists would use "fragments of found images in collages that are then reassembled into a completed work" (Flanagan 2009). By combining these photos of objects that resembled eyes/noses/mouths, I'm creating a completely new piece of artwork from its original components. Hanna Hoch, a German Dada artist, also uses a similar technique of "rethinking of materials, composition, and cultural investigation to create the 'reordered reality' of her series of found-object and photo collages".

As my last few weeks' responses involved a lot of participatory play with others, I wanted to engage in some solitary play this week (Sutton-Smith 2006) where the act of playing involved walking around RMIT, actively observing the world, and collecting photos of objects. I'm also introducing uncertainty to my Found Faces Generator by adding an element of randomness in the selection of photos for the composite. As Salen & Zimmerman (2004) argues, uncertainty is a key component of meaningful play; after inputting all my photos to be selected via Processing, I have no idea what the final face will look like. This will be the 'surprise' and 'reward' elements of my game, after all the hard work of collecting the photos.

Method: Create a generative system using Processing that randomly generates faces from found objects. My input will be photos I took of objects around RMIT that look like eyes, noses and mouths, and my output will be composited faces drawn from a randomly selected photo from each photo category (eyes, nose, mouth).

After Matt's lecture, I spent quite a bit of time inside Building 7 and on Bowen St taking photos of found objects that resembled a pair of eyes, a nose and a mouth. The end result was 85 photos in total, with nearly 30 photos in each category. I then rushed back to the studio to create my random face generator in Processing.

I was able to randomly generate a photo through the file name of each photo (randomly generating a number and then selecting the photo with that number in its file name). Being quite new to Processing (I just started using it this semester), I learnt how to generate random numbers, format numbers in strings, load and resize images, and play with filters like making the photos grayscale. I also wanted to play around with blending modes like multiply, but I ran out of time to get it working.

After some struggles with getting the images to load in the right positions on the screen, I managed to get the script working. Every time the script is run, a random face is generated using the found object photos from each category: eyes, nose and mouth. The results were surprising and hilarious. Attached above are some screenshots of the faces generated.

I was surprised at how much the composited images looked like faces. I really wasn't sure if this experiment was going to work out or not as I was collecting my photos. Imagine the surprise I felt as every time I click the 'Run' button, an entirely new face looked back at me, created from the objects I photographed just minutes ago. :) I got a lot of joy from the random component of this interactive toy - because I'll never know what kind of face I'll create. I found myself continuously clicking on the Run button to try and generate the funniest face possible. I think that is the beauty of this week's theme - Forces - and how the system I've set up still allows for unpredictable results.

Technically, I'm starting to feel more confident using Processing as a tool. I still need to refer to the Reference guide a lot on the syntax, and the code definitely can be a lot cleaner, but it's functional. If I had more time, I'd write a custom function to generate each image, rather than repeat it three times for the eyes, nose and mouth. I'd also would've liked a larger collection of photos to randomly pick from, and add a button on the interface to re-run the script; but again, time got the better of me. Perhaps in a future iteration, users can submit their own photos of eyes, noses and mouths to build up a proper photo database.

I also enjoyed actively seeking for eyes, nose and mouth shapes in everyday objects. The act of noticing my environment - from marks on the walls, to signs I walk past everyday, to leaves and rubbish on the ground - has made me more aware of how much my surroundings have to offer if I looked closer.