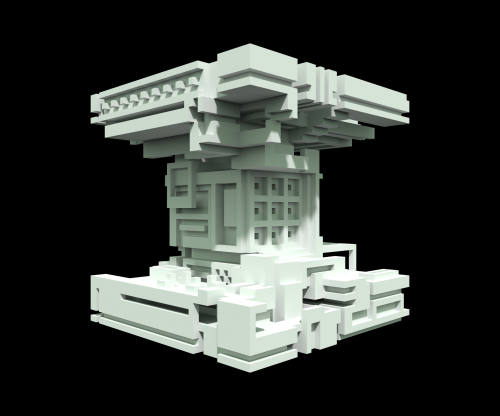 In response to this week's theme of Forces I created three unique structures inspired by Brutalist architecture and the designs of MC Escher. These structures were designed with the constraints of voxel art, specifically using the tool MagicaVoxel which restricts the space in which you can work in to a 40x40x40 cube. Additionally, I constrained myself to keep ergonomics in mind. These spaces are designed as miniature cross sections of buildings in which humans could exist and operate.

To create these structures I began with a solid cube, which I chipped away at and manipulated. The key was to not be precious about my shapes. I would experiment at first, shifting the form around and radically changing it over and over, before settling on a general shape and refining from that point. I would detail the structure, adding hallways, open walking areas and staircases to accomodate people. Finally I would render each object, altering the lighting to give each structure a specific hue to inform character (e.g. Object 2, a large, monumental structure is bathed in golden light, making it feel royal or holy).

Similar works have been made by Remedy in their 2019 video game Control. The game is set in an ever-shifting monolith of Brutalist architecture called The Oldest House. The unique shapes and emergent patterns that form in this environment are similar to those in my work this week, specifically the upside-down pyramid in Object 1.