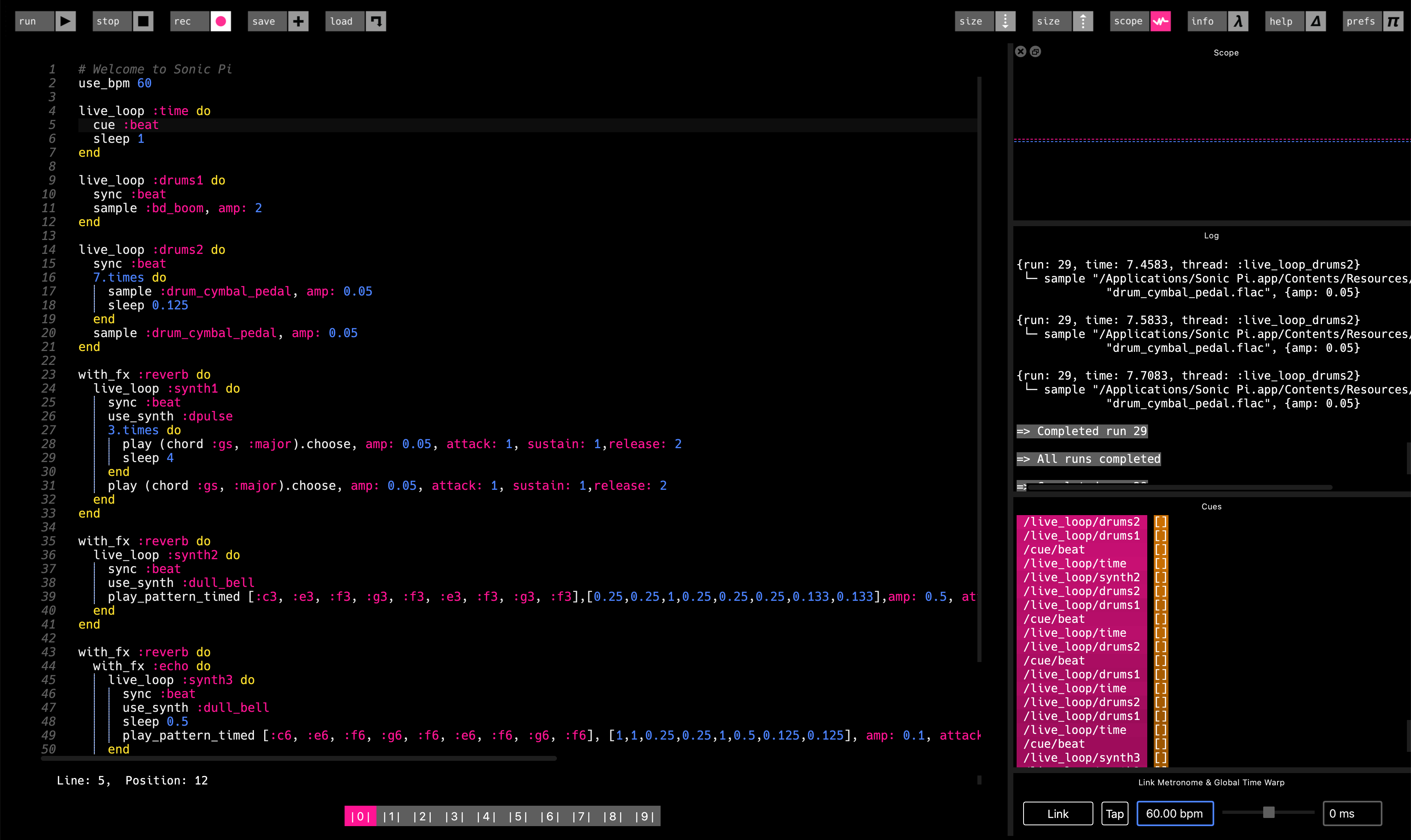 My response is viewable online here

Theme :
I had a hard time getting started for this week's exercise. Sound is an area that I don’t have a lot of confidence working with, and I struggled to come up with an idea to work on. My initial vague idea was to create some audio reactive visuals, and find ways of expressing sound visually. Additionally, because 3 / 5 of my previous responses were created using P5.JS / Processing, I wanted to push myself to use a different medium for this response.
I spent a while looking into both Touch Designer, and Pure Data, two programs I haven’t used before, to see if I might be able to use either for my response, but wasn’t confident enough that I would be able to use them for something interesting, rather than just recreating an example / following a tutorial.
It was at this point that I came across Sonic Pi, a coding environment for coding audio, as well as this video of a live coding performance, and this TED talk by Alex McLean about Algoraves, and algorithmic dance culture. I was really inspired by the idea of coding as a performance, and so I decided I wanted to program a song using Sonic Pi, and record the process.

Method :
I spend some time trying to learn the basics of Sonic Pi, reading through the getting started tutorial on the project’s website, and testing out the examples given, as well reading through notes from a creative coding workshop that used the software.
I realised that the challenging part of the exercise would be the music composition, as it’s not something I have any knowledge of. I spent a little bit of time listening to some instrumental / ambient music pieces, and took notes about how the songs were built up with different sounds and instruments.
I then spent a bit of time exploring the in-built synths, samples, and sound effects, trying to build loops that I would be able to layer together to create my composition.
Once I was happy with the loops that I’d made, and had worked out a rough order that I would code the song in, I set up for the final recording. I recorded my computer screen, as well as recorded the audio being produced by the program, so that once I was finished I could sync the audio and video together, to create a record of the process.

Context :
Being inspired by algoraves, and the techniques of live-coding (McLean, 2017) my response took on elements of performance play (Sutton-Smith, 2001), as the practice derives from creating music for an audience and improvising and responding to the reactions of a live crowd. My response didn’t have this audience aspect, but I was still inspired to record the real time process of writing the code and building up my song element by element, rather than simply recording the completed song.
The process of learning to use Sonic Pi as a coding environment was also an important part of my response. The time I spent exploring the synths, samples and effects, and experimenting with how they could be used and layered together to create music, was a form a constructive play (Christie and Johnsen, 1987), as I was working with my base components, and working out how to combine them into a larger, more creative whole, through a process of tinkering. This also somewhat ties into the Theory of Loose Parts (Nichols, 1971), though the environment that offered me the variety of components and space to be creative in was a digital IDE, and not a physical space.

Reflection :
I'm glad that I went with using Sonic Pi for my response, even though it was further out of my comfort zone than making something in P5.JS would have been. I enjoyed the process of exploring the software, and playing around with the in-built samples to see what I could use, and just the time I spent editing lines of code to see what the result would be on the audio I was listening to, even though I think that my final response is quite basic.
Though I was inspired by algoraves and live coding, I don't think I quite recreated the process. I don't have enough of an understanding of music theory to be comfortable improvising, so my response doesn't have that element, even though in his talks Alex McLean highlights that as an important part of the practice. 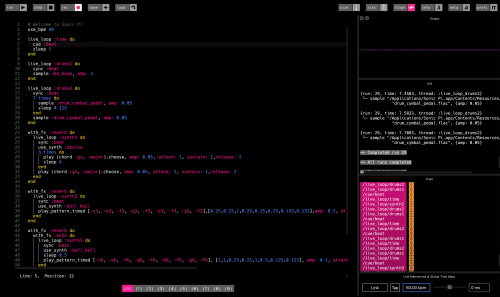