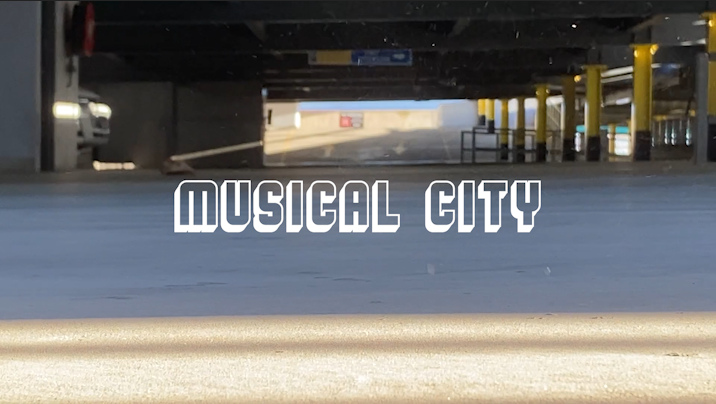 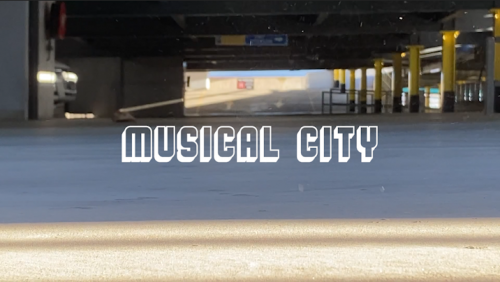 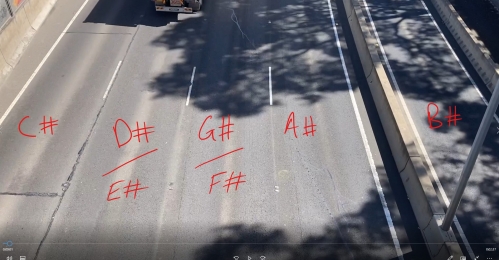 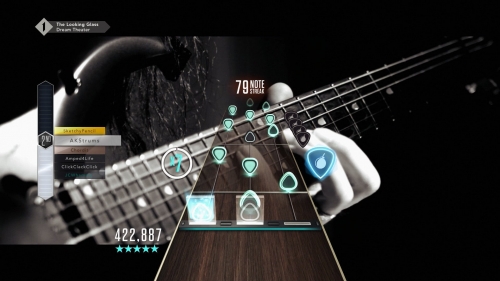 In response to the theme of Play and Sound I created an electronic music piece using video footage as a sort of input to dictate the rhythm and melodic structure.

This work was inspired by animated works designed to illustrate sound (an example here by Yara on YouTube: https://www.youtube.com/watch?v=d24xrC_XQgQ) and attempt to create the opposite: sound dictated by vision.

Structural elements of this piece were also inspired by rhythm-based video games, such as Guitar Hero and Thumper. This is evident in the freeway portion of the video where specific traffic lanes produce specific musical notes, and the duration of each note is dictated by the size of the vehicle travelling in it. In the third image attached to this page you can see a breakdown of the musical scale used to inform this structure.

Musically, I was inspired by the works of Thundercat. Their track Jamboree was a particular inspiration; I was drawn to the chaotic funky energy it exudes and the unusual chord progressions it employs. I allowed myself to experiment, to move around and wiggle out of the confines of the key of C#, which is also the key Jamboree is in.

The focus for this exercise was to get outside and observe rhythms and patterns in my environment. I gravitated towards areas with heavy traffic, hoping to create an upbeat and energetic piece.

I then filmed these locations for a few minutes and imported the footage I captured into an electronic music production programme where I could simultaneously view each video and compose music to perfectly match it. From this point the process came down to feeling out how I wanted to interpret my footage and what musical style I wanted to adopt.

Once I had produced a handful of clips I assembled them into one consolidated video. I maintained the same tempo and similar beats throughout each clip, which made this process mostly seamless.

My final piece explores how environments and visual actions can inform distict musical pieces and demonstrates a unique form of improvisational composition. In the skateboarding segment the pitch of an arpeggiator is dictated by my lateral position on the screen, as if I were playing my skateboard, or rather the environment around me through the skateboard, as a musical instrument.

I am very proud of this work and believe it has a lot of potential for experimental music production. It recontextualises space, turning any environment into a theremin that can be played and exploited in almost any way by almost anything. You could record clouds and apply a rule set to say that pitch is dictated by size or colour; you could create a track that chronicles the movements of the celestial bodies in our solar system and explore the relationships between these bodies through the sounds you apply to them; you could even turn your home into a musical instrument and capture your movements across the span of a day.

In this way play comes from the playing of one's environment in a ludic sense. The musician is free to interpret their environment, however they choose to and are only constrained by the rules they set for themselves and the final product emerges far from being a random assortment of notes and rhythms. Through this process of toying and experimenting with our environment we uncover inherent rhythms and relationships between objects and motion that beautifully translate into music.