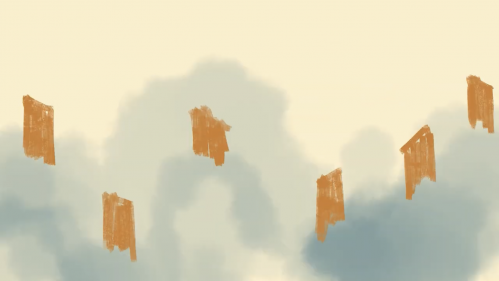 I began this week by a. wanting to recontextualise everyday sounds, and b. recontextualising the way I use sound in my animation practice.

Creating music using everyday sounds and objects was an idea pioneered by John Cage. Plus, applying abstract animation to sound was explored by Oskar Fischinger. I am interested in exploring both these ideas, and using a free form playful approach to animation. This approach will force me to play with the usual process of animation, going narrative to sound. By starting with the sound first, it is a reminder that this aspect is not just an add on to the animation, but rather an active part just as present as the visual.

I started by recording a number of sounds around the house. I mainly recorded movements and objects which makes sound, like the kettle, but I also experimented with tapping on different surfaces and having a more active role in the creation of the home sounds.

I then edited the sounds together using Audacity, and uploaded that sound straight to clip studio paint. I started animating each sound as they came, building one on top of the other and playing with how they could be represented .

I really enjoyed this process, it was a fun exercise to break free from a narrative to sound approach. It allowed me to be more loose and free flowing as I animated. Hence, I think it would be an interesting exercise to create lots and lots of iterations of this process and think of a lot of different ways to show the same sounds. Moreover, the second half of the animation takes a more narrative approach. I think it would be great if a bunch of sounds were recorded, and randomly played to the animator. Then, they would have to create a story as they went, matching the sounds but not knowing what is next. This could be done with multiple people, almost like an exquisite corpse, and sound would become a tool for improv animation, or perhaps jazz animation.