This week I had the opportunity to do something I've always wanted to try - making foley sounds. When I looked at Play and Sound, I thought of putting two sounds with different contexts together, for example, nature and technology. We are constantly surrounded by modern technology. Wherever we are, we can always spot someone's ringtone, texting sounds, alarms, notifications and vibrations. So I thought, why not bring these sounds into the nature, and create something interesting?

I'm deeply inspired by foley artists like David Ian, Chris Moriana and Alyson Moore. The purpose of foley artists is to make sound effects using unexpected props to make the audience get into the story of films, plays, animations, performances, etc. , without noticing the difference. Since it's time consuming to actually go to different places to record sounds, foley artists often have small props in their studios to make every sound they need. Besides the small squares of concrete floor and wood board that we usually see for making walking sounds, the artists also utilises other objects and tools in a creative and sustainable way. For example, knocking coconut shells together to mimic horse walking sounds, turning a metal door handle to make gun cocking sound and crushing an ice cream cone for egg cracking sound.

I have also been to the foley room at ACMI and experienced what it's like to be a foley artist. There were a lot of things to deal with for just a 30-second video clip and it was easy to make mistakes and mess things up. However, foley art's creativeness gave me lots of insights on recontextualising objects and execute productions with precisions.

I took a walk in the park and played various ringtones and sound effects on my phone at the same time just to see if there's anything that matches. However, I found it too distracting because I could neither focus on my surrounding or think about what sound to use. So I put the phone away and allowed myself to fully immerse in the natural environment. As I was walking, I would touch the leaves to listen to how it rustles or kick a rock to see how it bounces. Later, I found some wild mushrooms on the ground and recorded myself picking them up (I washed my hands afterwards). After trying out a few more sounds at home, like coffee machine humming and turning on the stove, I came up with the idea of using the tapping sound of Google Home to recreate the mushroom picking video, so I started practicing tapping both side of the Google Home volume buttons while watching the video a few times before I did the final recording.

Making a simple foley sound wasn't as easy as I thought because there were still lots of hand-eye coordination involved. I had to rewatch the original videos several times to memorize the cue and I had to pay attention to the volume of Google Home since it gets too quiet or too loud if I keep tapping one side. One thing I wasn't happy with is the video resolution because I forgot to film horizontally. Overall, I think this week's activity is again a great way for me to think outside the box and combine different elements together to practice creating something unconventional. 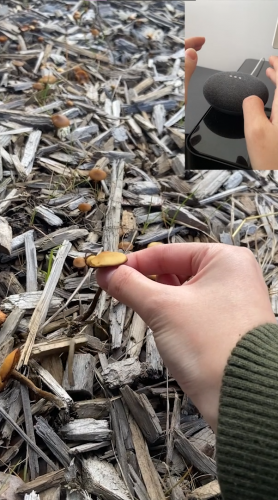