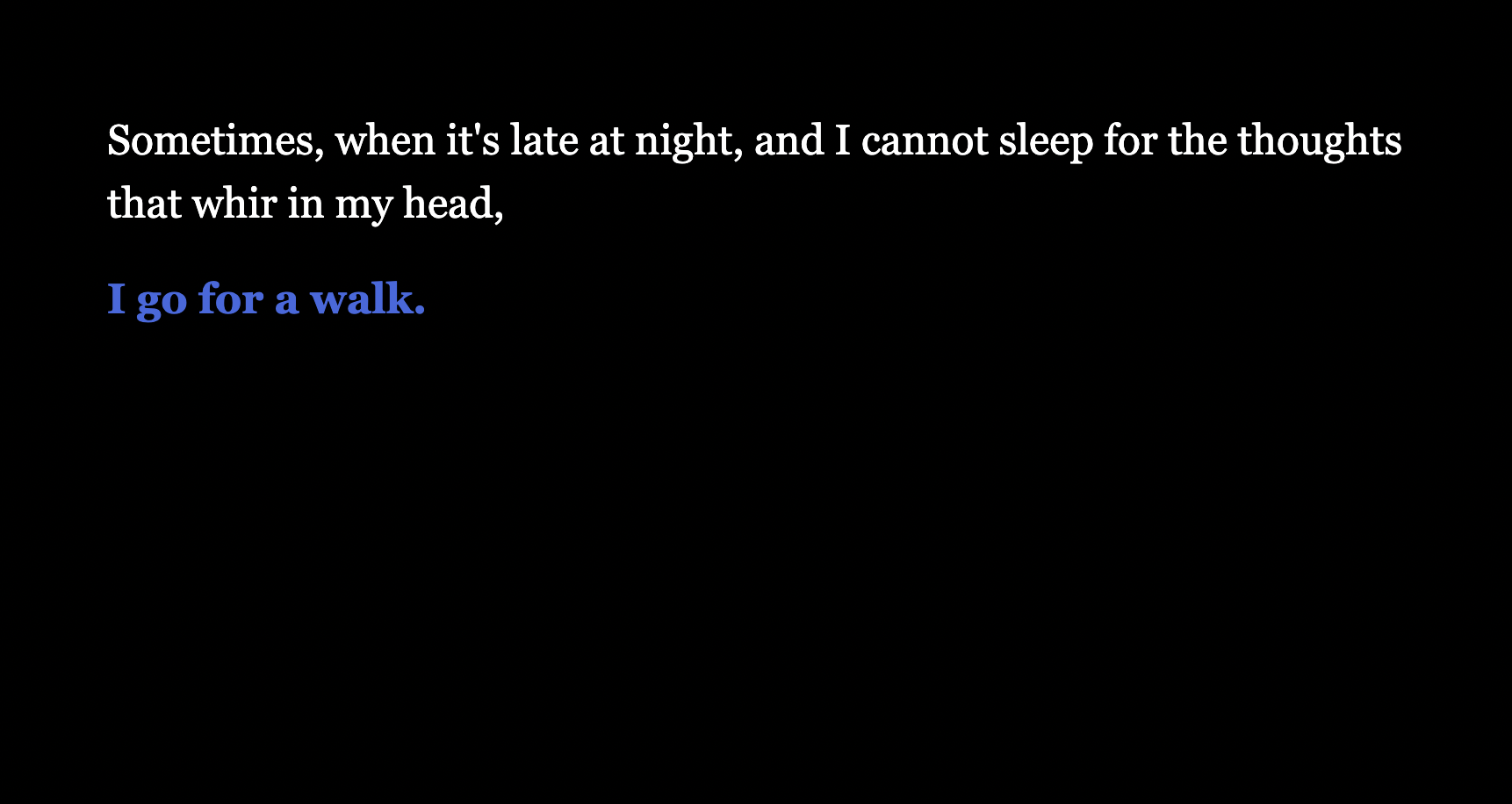 My response is playable online here

Theme:
For this week’s response my initial plan was to attempt my own dérive, using AutoFlaneur to help ease myself into the process of the exploration. I then intended to document this journey (using photos / videos / sound recordings and notes) and then from this documentation try to develop a creative response, potentially one that used geolocation tags, and would require a player to retrace my journey to view it in its entirety.
Unfortunately between work and some other large time commitments the past week, I was unable to find a suitable chunk of time to spend on this exploration, and found myself running out of time to complete the response.
I decided to rethink my approach to the theme, and find another way of exploring ideas of place. I was drawn to creative works that explore both physical locations, but also the memories and associations that these places have for the artist. In particular I was drawn to Terracotta by Olivia Hanes, and I Am Still Here by Cecile Richards, both of which were attempts at processing the thoughts and emotions the artists were experiencing during Melbourne’s extended lockdown. I was also inspired by The Next Train To Depart, by Tegan Webb, which similarly explores a range of memories through the physical spaces they are embedded in, symbolically linked by Melbourne’s train network.

Method :
For this week's response I wrote a short piece of hypertext fiction using Twine, chronicling a solitary late night walk, pieced together from memories of many different walks and experiences. The piece explores both the physical locations that the character wanders through, as well as the memories and thoughts that these places evoke. There are moments where the narrative branches, with a major choice at the beginning splitting the narrative into two halves, but most of the piece is relatively linear. I wanted to use the hyperlinks to make the story more spatial, with each location that the character passes through being a separate moment that the reader experiences.

Context:
The final iteration of my response takes the form of imaginative play (Sutton-Smith, 2001). I drew from the memories of the different places I’ve lived, and the time that I’ve spent walking, jogging, and wandering through suburban landscapes, and amalgamated them to create a fictionalised narrative. This act of reflecting on my memories during the process of writing this piece of fiction also made it a type of contemplative play (Johnson, 2020), relating to meditation practices, including meditative walks.

Reflection :
I’m not overly happy with this week’s response. I was very excited by the idea of practising dérive, and using the experience as a basis for a creative work, so not being able to commit to this process due to time constraints was frustrating.
I went with a piece of Twine fiction because it felt achievable with the time that I had left, but I don’t think it’s a particularly strong response. I struggled with balancing the tone of the text, between describing the physical location the character was exploring, the emotive experiences that they were having, and the interactive components. This is a problem I’ve had in previous attempts at using Twine, and I’m unsure if this is something that can be overcome with more time spent planning and structuring the piece before beginning to write the passages within the engine, or if my writing style isn’t suited to the form.
I also wonder if maybe Twine was the wrong medium for this particular exploration. Perhaps if I had tried to tell this little story in a more visual medium, possibly using Bitsy to create a little pixel world for a player to explore, the tone of the writing would feel less muddled, as I would have been able to focus entirely on the interior monologue of the character. 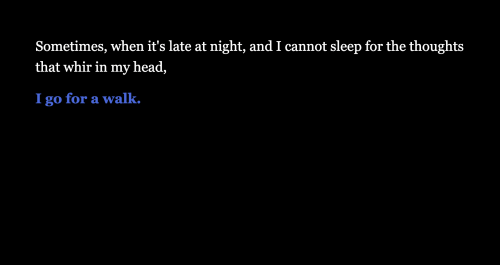 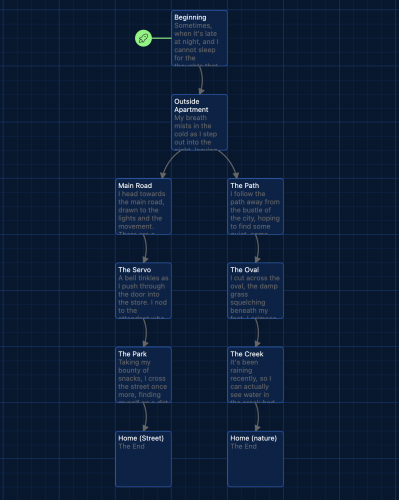