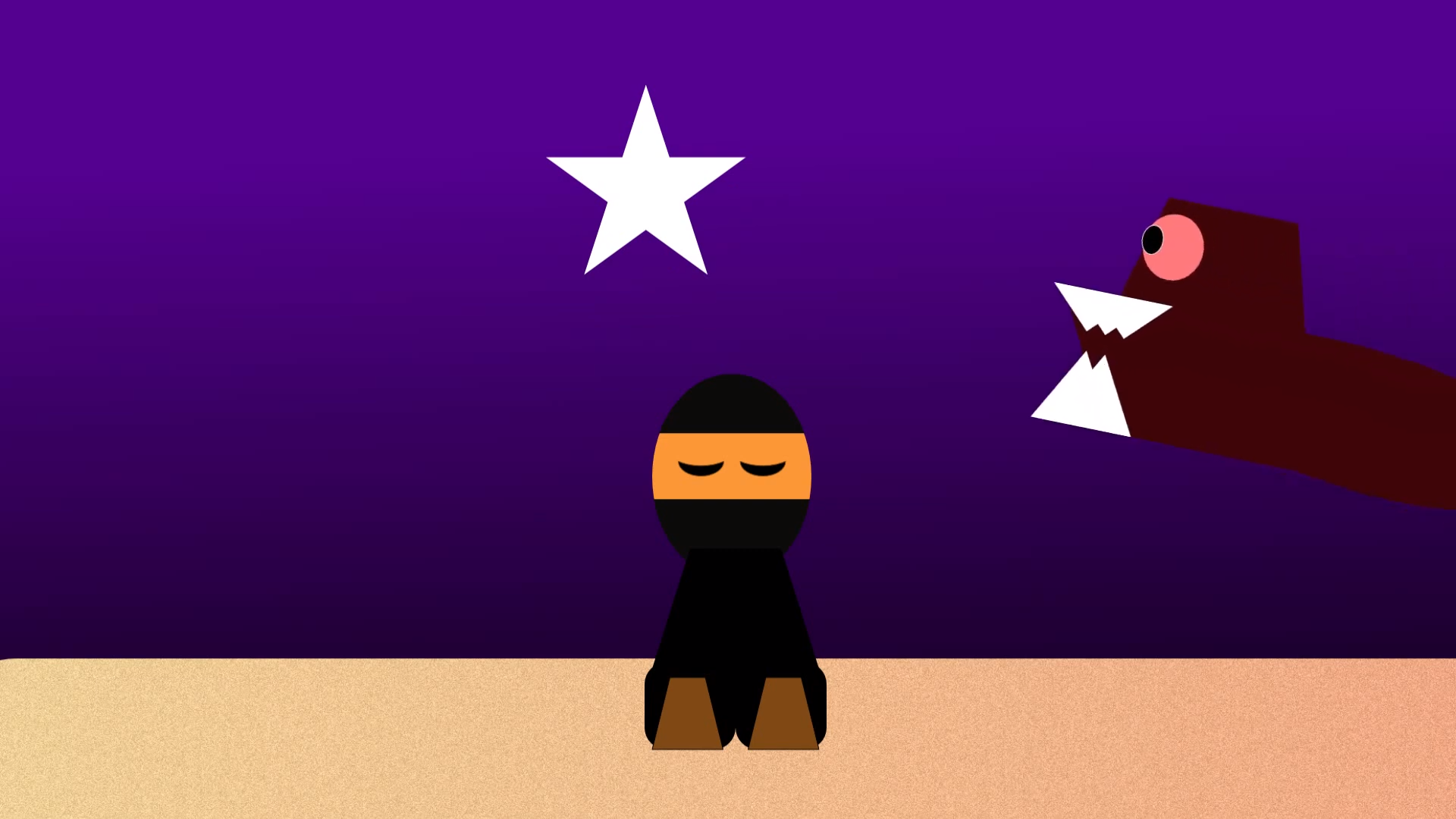 Context
For the final week I created a ninja who is meditating. I started off by experimenting with different background animations. In the beginning, I wanted to create it in 3D, however, I opted for 2D after my experiments were deemed too hard for their outcome. I looked into different animated backgrounds such as (https://www.google.com/search?ABG )  and opted to create a few of my own. While making some that were ‘fails,’ I did end up with the stars, and the cycling of time backgrounds. “Even in more contemporary contexts, play is the domain of the artist, not the audience” (Sharp, 2015, p. 81). In my regard, I played with all the ways I could incorporate stillness in my project. I explored making the character motionless, gravity and time still, the stopping of music, and the contrast between the static and the moving. “How is that possible? In a painting, a horse cannot gallop; it can only appear to do so, in a stilled, «pregnant moment” (Bal, 2016, p. 2). And thus, the still image can infer meaning beyond what it is physically doing. In my project do you see a Ninja who is doing nothing? Or do you see a Ninja who is meditating, sleeping, or thinking? When designing this project, I wanted to indicate he is doing either of the three but primarily meditating, using the still image.


Response
For play and stillness, I opted to play around with the contrast between the still image and the moving one, in the beginning of my project, I make the ninja close his eyes and be still, while the background behind him is moving. The day turns to night and as his meditation becomes deeper, the background becomes more creative just like the mind. It was so creative that he was thinking of a creature eating a star. Soon after he envisions himself in a videogame, while he is dodging bullets. I also used stillness here in a non-conventional way where he dodges the bullet by remaining still in the air. This defies gravity, however, this is APD, so I opted to try something weird and unusual like this. I also use full stillness at the end when he ‘wakes up’ from his meditation, everything stops moving and even the audio stops. This was another one of my wacky ideas. The thought of it is like when you wake up from a scary dream and everything stops except your heartbeat. While making it I did find myself shocked every time I watched it, which was the whole intention and thus I decided to keep it in.


Method
To make this project, I used Affinity Photo, which is like a Photoshop program and HitFilm Express. I played around with shapes and forms this week using shape tools opposed to drawing like I usually do. I wanted to explore art in this style as I have seen some in the past that looked nice. I created different components of things that will animate. I animated it in different styles such as, pivot animation, frame by frame animation, smooth animation, and a bunch more different ways, that really tied my learning from my APD journey and all the different projects I made in an animation format into the project.


Reflection/Overall Reflection
Overall, with this project I am happy with the result I got. I am glad I got to tie in some different animation styles that I have learnt throughout the semester, I am happy with the mood and feeling of this piece, and I am also pleased  with how it looks. I think there has been a big improvement shown throughout the semester and I am grateful to have this opportunity, environment, and the freedom to try new mediums. Before this semester I did not animate at all. So, throughout APD this has been a ride of where I went from basically no skills and low experience in animation to being able to create something that seems nice. I am happy with my concepts and ideas throughout APD as well as in this project. I feel I have come a long way in my journey, and while I can still always improve, it is still nice to look back and see how I started, and where I am now. I am also glad about my creative skills when faced with challenges - when it comes to software constraints, some projects, such as this one, forced me to make something even though I did not have all the ‘industry quality’ programs. I just did not have them available like I did in other weeks, and thus, I had to consider all the different ways I could make within these limitations. And while this project only used Affinity Photo and HitFilm, with enough practice and thought, you can always work out a way to create something nice.