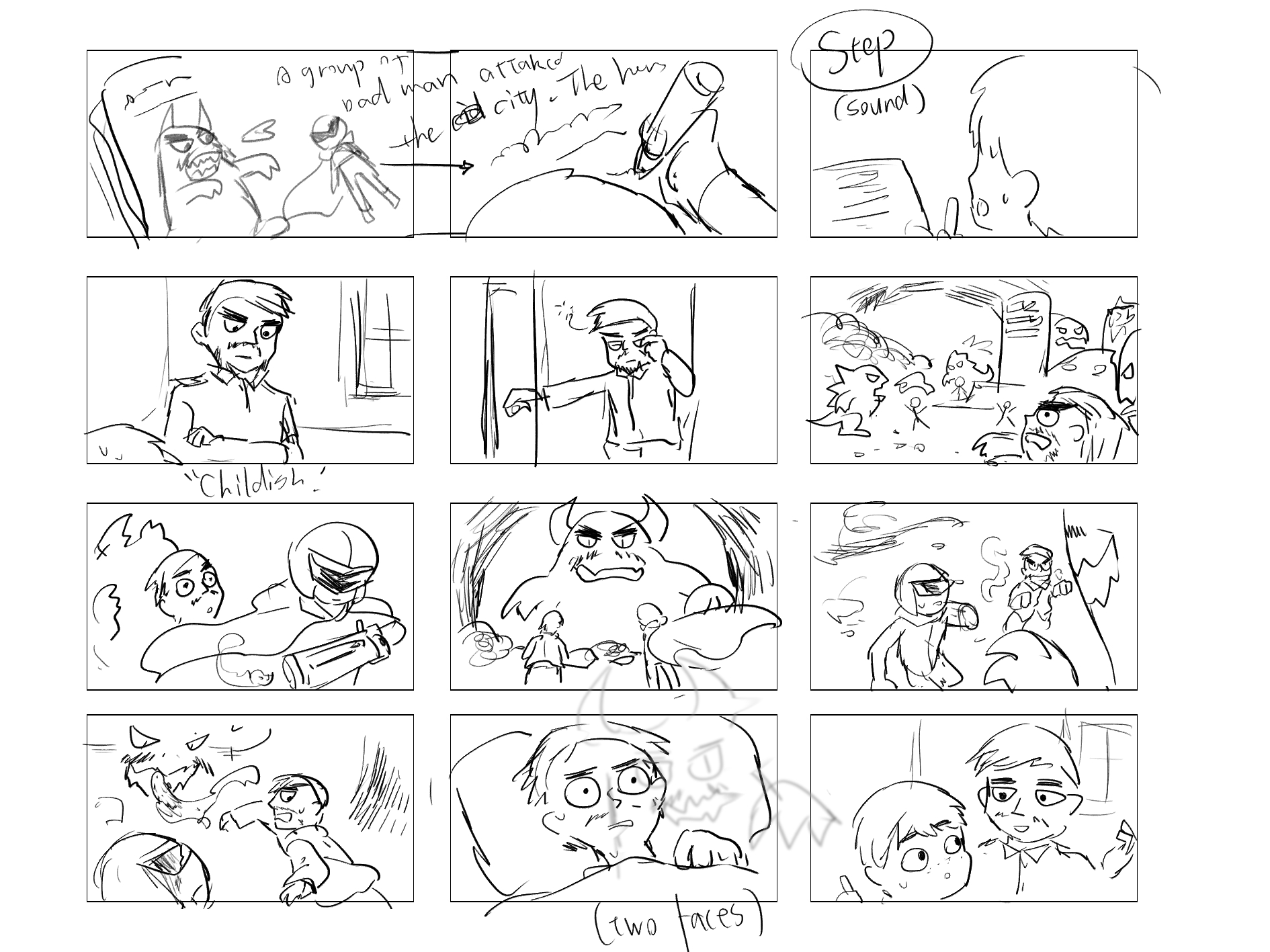 Story: He is a stern and unsmiling father. One night, he comes across his son drawing a monster with a bushy beard and fierce eyes and writing a short story that says, "A group of bad men attacked the city. The hero keeps beating the bad guys, but a terrible monster emerges. The hero tries to take him down, but the monster is invincible. The monster coldly mocks the hero, and the city is destroyed." The son notices his father coming in a little flustered, but the father says, "That's childish." He leaves the room. At night, the father suddenly finds himself in the middle of the city, surrounded by monsters. Before he notices that, the monster takes over. At this time, a hero appeared. His consummate fighting skills let him quickly suppress the monsters and free the father. But suddenly, there is a loud noise, and a monster with very fierce eyes appears. The hero and the father try to knock the monster down, but no matter how they attack, the monster is not hurt. The hero falls panting, and the monster laughs coldly. The father suddenly realizes where he had seen the story before, and the monster with the fierce eyes and the bushy beard seemed to be taking over his face...
The monster attacks them, and he instinctively defends the hero. He wakes up. It was only a dream, but he thought about it for a long time. He walks into the son's room, and the son panics and covers the novel he was writing. He goes over and pats his son on the head and says, "Maybe the hero can communicate with the monster more. Then he can resolve the conflict!" The son nods thoughtfully.

This week, by looking at the use and expression of MOVEMENT, I wrote a story based on the premise, "An obscure novelist writes stories, but his stories all come true in another ". Through some details, such as appearance description and corresponding plots, I make reality and dream correspond to each other to create a more deeply character image. For example, the father's indifference to his son and the son's inability to resist his father reflects the monster's tyranny and the hero's failure to defeat the monster. The monster corresponds to the son's graffiti and is a metaphor for the father's image. Meanwhile, in the real world, the father looks down at his son through the camera, symbolizing majesty and oppression. And in the dream, it turns into an upward look oppressed by the monster. I hope that by the movement of the camera angle and the change and echo of time and space, some things could be revealed, even without being clearly explained by dialogue.
In the film OBEN(https://vimeo.com/45203970), reality and the virtual world are linked by specific items, such as climbing rope as an adventurer and patient's physical tube, and unstable heart rate with the crazy weather. There is no dialogue in the whole film. Still, through the overlapping of images and sounds in the natural and virtual world, the seemingly distant space is connected by these shots and symbolic objects so that the audience can better understand the characters' situation.
Through the exploration of movement, I further thought about how to tell a story through the corresponding media of camera movement and reality/virtual. I wanted this change to be subtly applied to the characters, allowing the multifaceted of the characters to be revealed in greater detail. 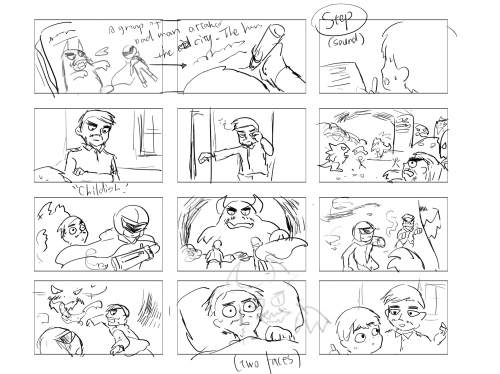