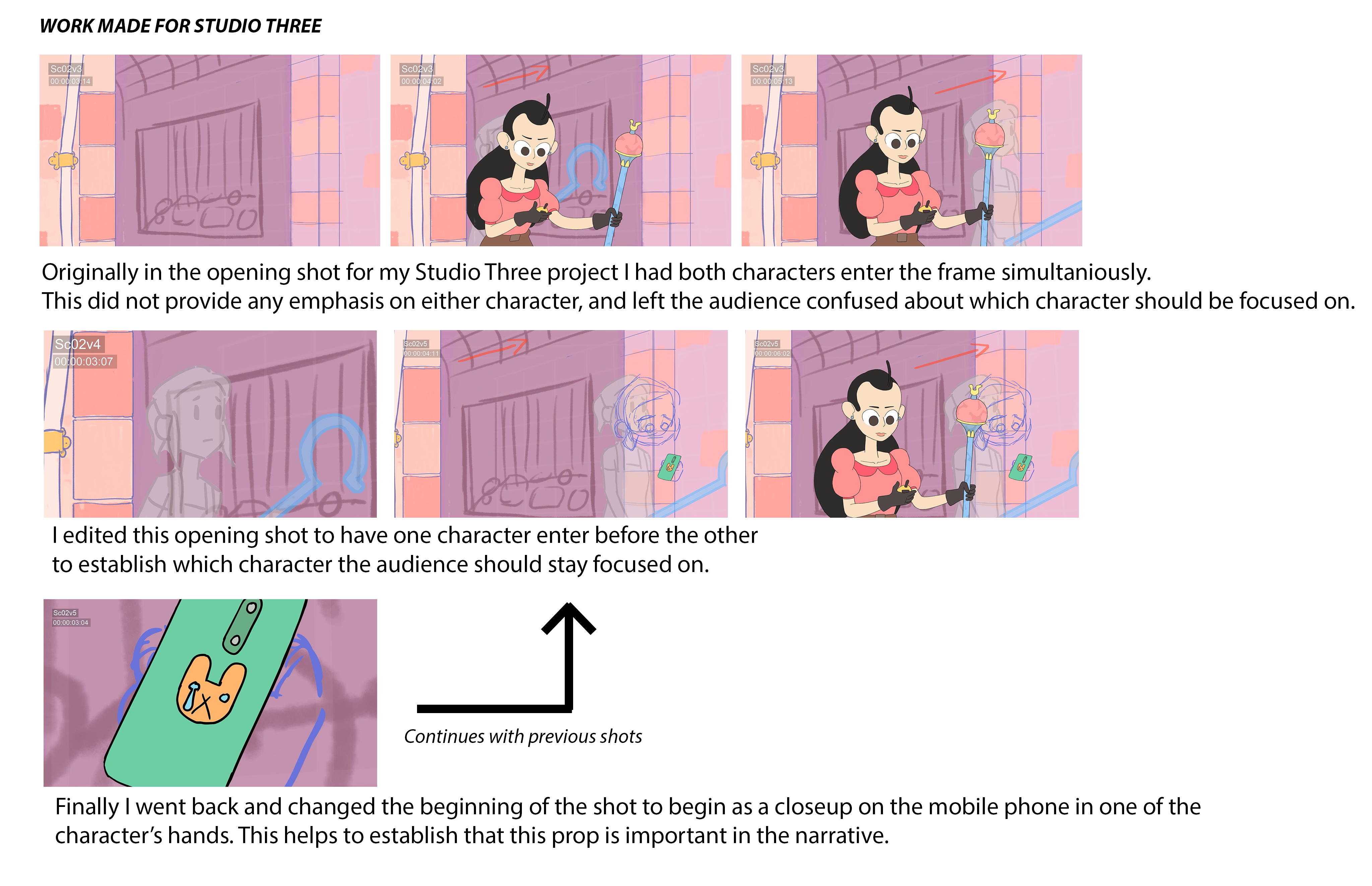 My response for week twelve of Animated Narratives 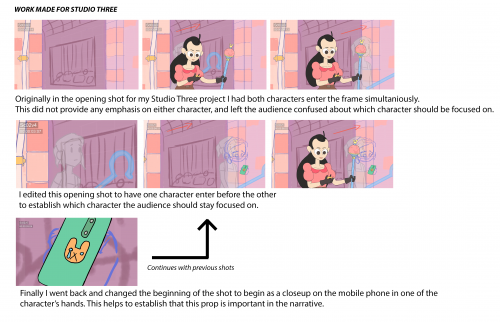 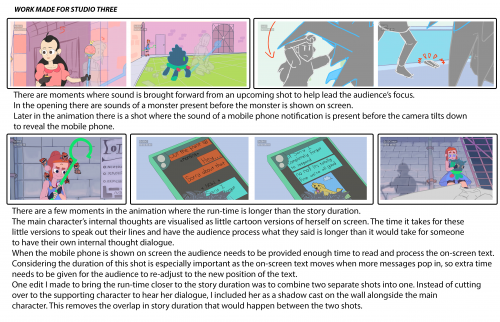 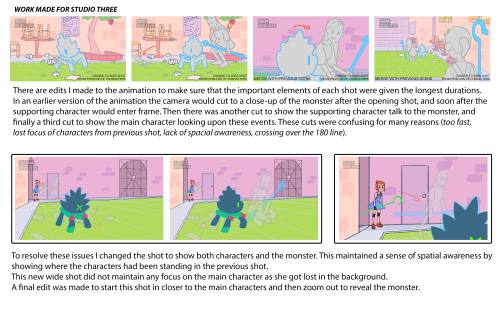 For this post I am doing a reflection back to week eight of Animated Narratives where the focus was on expressing and communicating time in animation.

For my Studio Three project I am creating an animated short film where there is only a minor deviation between the story duration, plot duration, and run-time. The intention for the project is to make a two-minute short animation that could exist as a small segment from an episode of a television series. The plot for this two-minute short takes place within one moment of the story as the characters are dealing with a narrative conflict.

With the story duration being closely linked to the run-time of the short film there is no use of flashback or flashforward techniques. All the action takes places in one location, and the point of view never moves away from the one moment in time. The editing focuses purely on cutting between shots, with no use of dissolves or wipes that might imply a change in time. There is a lot of action in the short film, and the characters move around the location a lot, so it is important that the editing maintains a consistent understanding of location and time to avoid confusing the audience.

Sound effects are used to establish upcoming details within the short film, bringing in sounds of the monster before the audience is introduced to it. This helps to keep focus on the main human characters in the story at first, but also lets the audience know that there is something else existing in this story. This same technique of using sound to lead the audience’s attention is used elsewhere in the short, having the sound of a mobile phone notification happening before the camera pans over to show the phone.

A key narrative mechanic in the animation is the visualisation of the main character’s internal thoughts. This is a moment where the run-time of the animation would become longer than the story duration. When a person experiences their own thoughts, it can be rather instantaneous with small broken sentences and feelings taking the place of fully formed sentences. When my character’s thoughts are visualised they appear as little version of herself speaking out her thoughts. So there needs to be enough time for each spoken line to be understood by the audience.

The setting for the story takes place in a modern setting with a fantasy element to the design and aesthetics. In regards to the time of day; shadows play an important part in the story, so the position of the sun will be important to consider. The location is set in a small open alleyway space in amongst some tall city buildings. Half of the location is covered in shadow and the other half is illuminated by sunlight. The main character stays within the shadows as she is sad and distracted, whilst the supporting character stays in the light as she is confident and assertive.

Light and shadow are used to help keep the focus on the main character by allowing the supporting character to appear in a shot purely as a shadow cast upon a wall. This helps with the pacing of the plot. Cutting over to view one character speak and then cutting again to show another character react extends the difference between the run-time and the story duration.

One important edit I did recently was to bring the camera in close during the opening shot to focus in on the mobile phone in the main character’s hand. This helps to establish the phone as an important prop within the narrative. Previously this scene used a mid-shot with no camera movement, which did provide space for the characters to enter the scene and been seen as important by the audience but did not provide any focus to the mobile phone.

When thinking about how the time spent on one shot denotes importance to the objects within that shot I do notice a flaw within my self-imposed run-time limit of two minutes. I have spent a lot of time cutting down the script to fit only the most important details into the two-minute run-time, and even still the pacing can feel rushed in places. The two-minute run-time is a constraint that comes from this short film being a product of Studio Three. As I look forwards with my intention of continuing this project beyond Studio Three there are points in the short film where I want to extend the duration of shots.