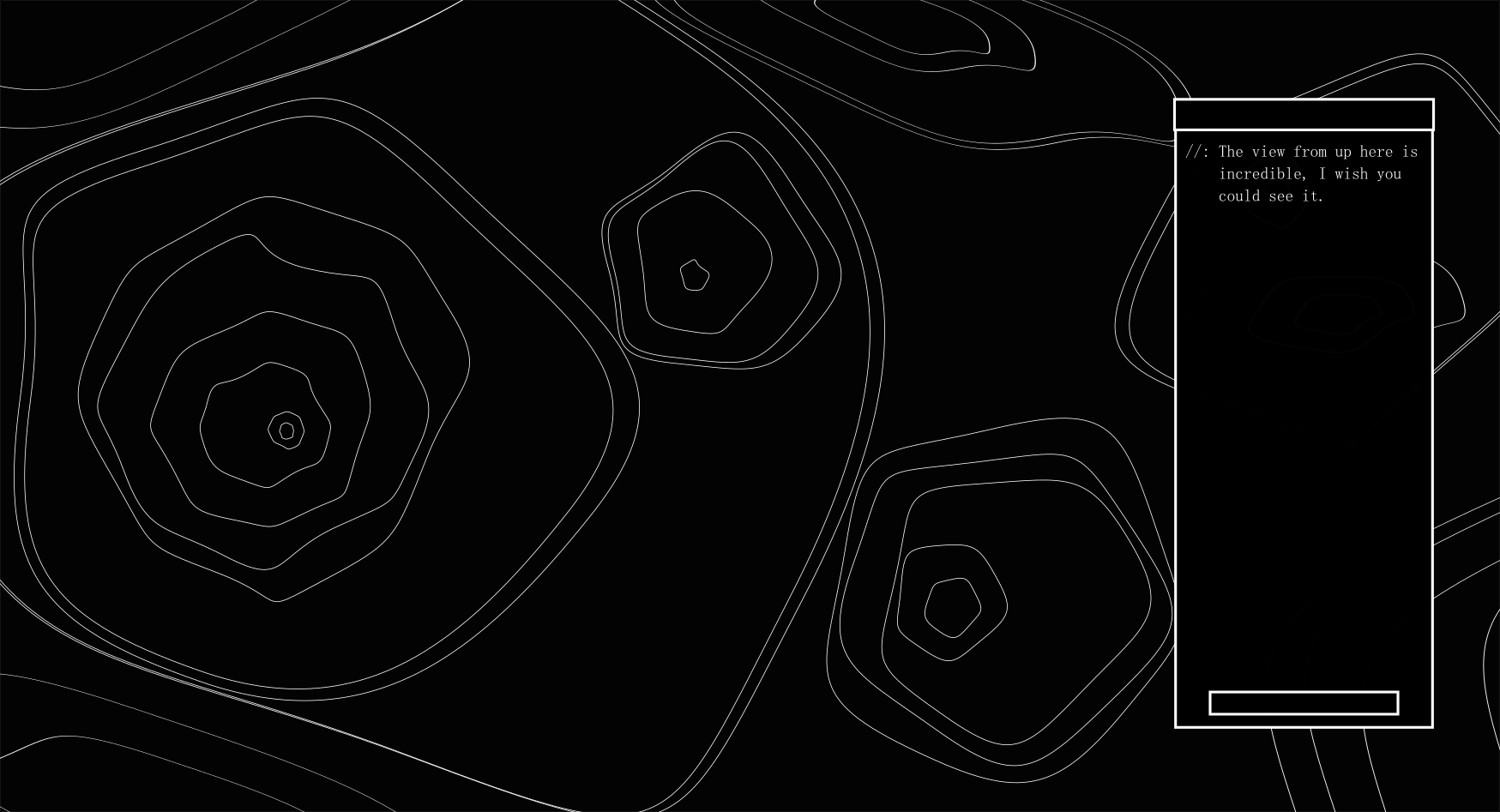 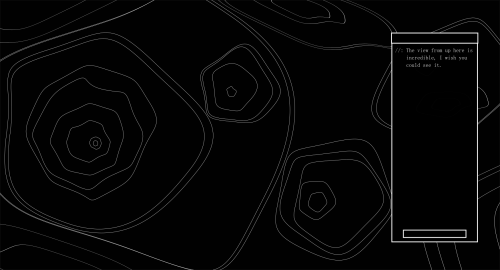 Premise: One of your crew members gets lost during a scientific expedition of an uncharted alien planet and it’s up to the player to help navigate them back to home base. The player, equipped with a topographical map that details the various terrain, must listen to the crew members' descriptions of their surroundings to try to deduce their location and direct them home. The game is presented from the perspective of a computer interface showing the map and a text chat window (a quick mockup is available above). As the player can’t see beyond this interface, they are left to imagine the alien terrain based on the rich descriptions from the crew member. The player begins to build a relationship with the crew member as they digress and share stories to keep one another’s spirits high.

The local flora seems to perk up as the fog settles in. What seems treacherous to you or me.. to them, well, its a cause for celebration.

I can see little spiral markings in the dirt, they're so intricate. It must be some kind of insect right? imagine being so small, but making something so beautiful.

These trees seem to stretch up endlessly its hard to make out their tops. You know, they kinda remind me of asparagus. I HATE asparagus.

So far the most hostile thing on this planet is this smell. Maybe I should count myself lucky? Yeah. I don't.

This sound is near deafening, it sounds like the entire face of the planet is being uprooted. Oddly, the energy is captivating, everything moving together as one.

Curious, the patterning on the flora here kinda looks like some kind of language. What could the trees be writing about? Maybe its a grocery list.

The rock here seems almost metalic. It makes this odd chime when I clip it with my boot.

This week I wanted to explore narrative design techniques for games and created a flow chart detailing the design of a semi-procedural dialogue system. Following on from last week, I have continued to explore ideas around navigating spaces you can’t see and painting imagery through descriptions and soundscapes. I am also interested in how the audience's relationship with characters influence their decisions or build on a sense of urgency.

I think games are particularly well suited to creating believable relationships and a sense of interacting with someone in real time. I feel this also adds to an audience's sense of urgency and to the emotional weight of their decisions. I think games can also inspire greater spatial awareness and a strong feeling of place as the audience has to navigate these spaces directly.

Lifeline by Three Minute Games (https://www.youtube.com/watch?v=TkB3gli-7bg) is a real-time texting adventure game in which you communicate with a sassy science student who has crashed on an alien planet. As they explore the planet, they will give you updates and ask for the audience’s advice in real time. Send them on a dangerous detor and you’ll be left anxiously waiting by your phone for hours in hopes that they are still alive.

This week I wanted to try utilising narrative design processes so I could approach storytelling from a design-first perspective. Creating the narrative systems helped stimulate ideas for character interactions, backstories and the alien landscape. I found this approach really productive because the design work provided me with a strong structural foundation for narrative ideas.