In week 7 I examined the theme of sounds.

By using mind map, I listed many interested ideas. In the end, I decided to choose the idea about baseball which I was most interested in. In folio 2, by experimenting with the combination of different art styles and the compatibility of 3D and 2D animation, the baseball game will be showed in an interesting and alternative way.

This week, I made the beginning of my folio 2 and try to show 2D images in 3D. Inspired by 3D greeting cards, the 3D world is achieved by changing the distance of each image. By using AE, I changed the z-axis values of different items to show the visual effect of opening a 3D greeting card. In order to make this process smoother, some swing visual effects have also been added. It is worth noting that the art style results in only key frames being displayed, and how to transition the character's movement process well has become a key point. Due to this special picture style, only key frames will be displayed. So how to show the transition between two key frames has become a key point. The solution comes from my sketch book. When I draw sketches with marker pen, I found that the ink of it penetrated the back of the paper. This reminds me of the two sides of paper, namely the front and the back. I can transition the character's movements by rotating a piece of paper.

In addition, some hitting sound effects have also been added to the work. In this way, the character's actions can be represented more accurately.

For me, sounds could reflect the atmosphere very well. In order to show the audience the exact location of the story and the lively atmosphere of the game, some non-dialogue human noises such as the noisy sound of the crowd will be used as the basic sound track, playing from beginning to end.

For this work, I went to watch a real baseball game, and I realized that the cheers of the crowd had gradually increased. To this end, I recorded people's cheering voices and adjusted the sound track to make it from weak to strong.

After reading Screenplay: The Foundations Of Screenwriting, I reflected the important of script. So I wrote the outline of the script: After the baseball was hit, it encountered many absurd sights during its flight (For example, it flew to outer space, flew to another world, and even traveled back to the ice age, etc.), and eventually fell back to the stadium. 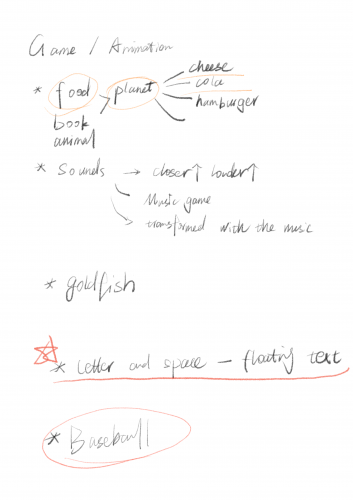