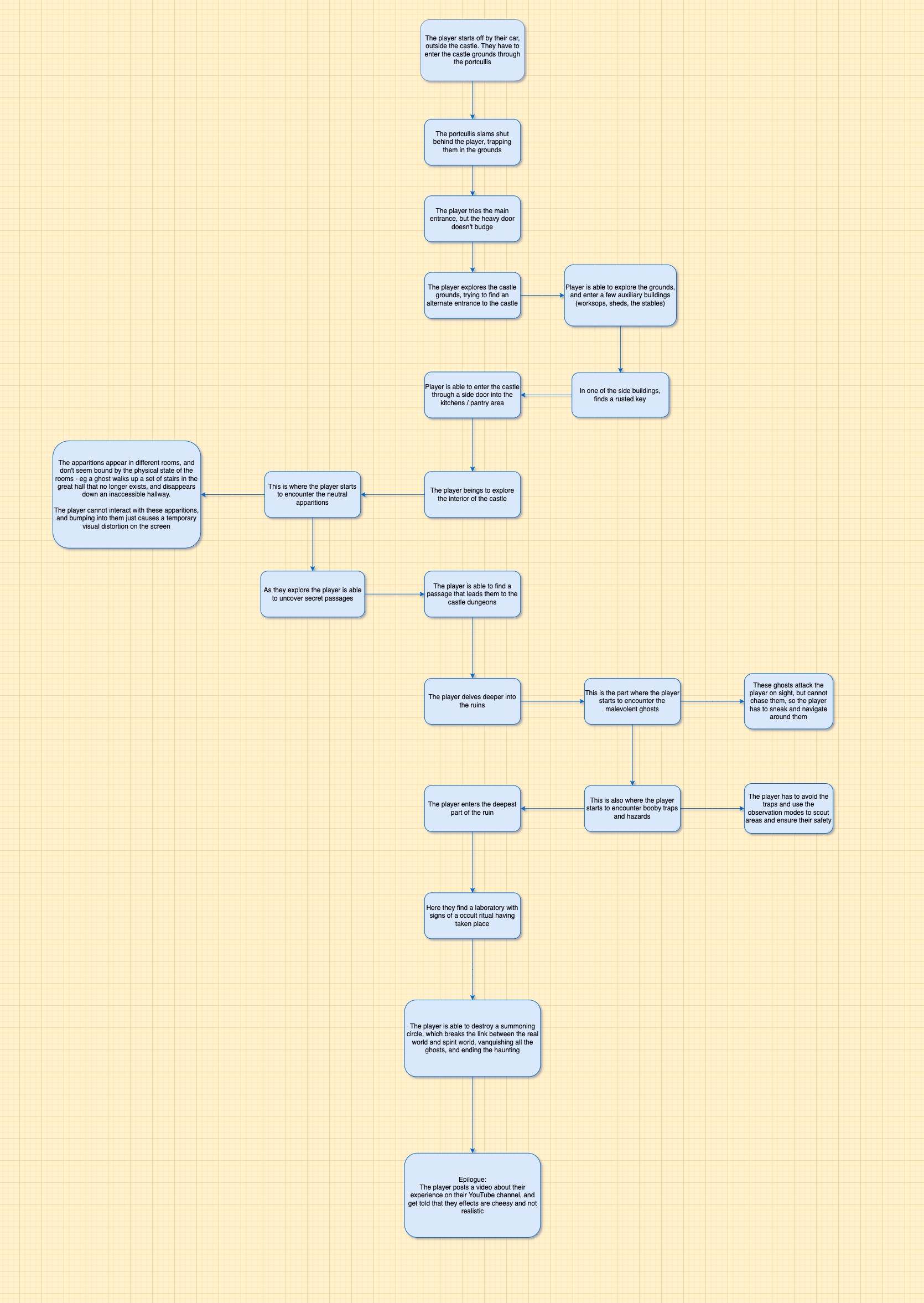 I slightly misunderstood the premise exercise for this week. Our task was to use any element to create a premise that introduced a character, a location, and a situation. I mistakenly assumed that we had to create a premise that combined several elements together. The premise I contributed to the channel was “the figure of the woman glows with an unearthly light, as she drifts across the ruined courtyard, and disappears through a rusted iron door”. With this premise I was thinking about ghosts and ghost stories, and considering Light and Time as my main elements. Light as a source that's emanating from within a character, as a way of expressing their inhuman / supernatural nature, and Time as a subjective experience, with the ghostly woman experiencing time as a loop, following a set of actions with disregard for the passage of time for the real world, and the changing physical state for the environment that she inhabits. I wasn’t entirely sure of how to develop this premise further, so once again I decided to just flesh out the basics, the location, the characters, and the situation, to see where it took me. I wanted to develop this premise into an interactive work / game, so I had that in mind as I began to expand on the idea

To develop and expand on my ideas for the setting, characters, and mechanics, I produced a mind map (viewable online here) and then once I had those components pretty well established I developed a flowchart to plan the sequence of events for the player as they played through the game.
In terms of setting, I knew when writing the premise that the setting of the game would be in a ruined / haunted castle, specifically a mediaeval European style castle.
In terms of character, I really only had the player character, which I decided should be a type of paranormal researcher and content creator, who has travelled to the location of the game to record footage for a video about the ‘supposed’ hauntings at the site. There are also the ghosts, but these aren’t characters so much as supernatural phenomena for the player to discover / obstacles for the player to avoid. The different type of ghosts (neutral or evil) would be distinguishable by the colour light that they emmenate, as well as their appearance and behaviour patterns, with the neutral ghosts repeating actions in a loop, out of step with reality, and the evil ghosts being more in tune with their environment, but more aware of their unnatural situation, and having gone mad because of it.
In terms of mechanics, I was thinking about the game as a 3rd person stealth / survival horror game, with the character controlling a character and exploring a 3D environment, solving puzzles to open up new areas, avoiding obstacles and hazards in the environment, and discovering a story as they delve deeper into the world. The player would also have the ability to enter different observation modes as long as they are standing still, which would help them to see different elements of the world, which will help with avoiding obstacles and discovering important information.
In terms of the sequence of events, the game would be about exploring the ruins. As the player goes deeper into the ruins, more supernatural events start occurring, and the journey becomes more dangerous, culminating in the player discovering the source of the haunting, and vanquishing all of the spirits.

With my concept this week being focused on ghost stories and hauntings, thematically I’m still exploring ideas around fear of the unknown and the unexplainable, but also curiosity, and the human drive to understand the unknown. The player character is explicitly entering the environment to ‘uncover’ the mystery of the hauntings, and to find the source for the supernatural phenomena that are occurring.
I think the concept is well suited to the medium of a game, because of the way a game environment can be designed to slowly escalate tension, and create a moody atmosphere. The player having agency over how they explore or advance through the experience would only serve to heighten this tension.

My initial premise this week, about a ghostly figure acting out of sync with the current time, was inspired by The Haunting of Bly Manor, a horror drama TV series directed by Mike Flanagan, released in 2020 (trailer viewable here). In the show the Lady in the Lake is one of the many spirits who haunt the mansion. The ghost cyclically awakes from a state of slumber, and then does a circuit of the grounds, not really noticing her current surroundings or seeing how the environment has changed since when she was alive, with devastating results for the living humans she comes across in her wanderings. I was also inspired by American Horror Story : Murder House (trailer viewable here), directed by Ryan Murphy and released in 2011. In the show, the house is filled with the spirits of everybody who has died on the grounds, meaning there are a multitude of ghosts, both benevolent and malevolent, from a variety of time periods, who are all trapped together in the titular house.
For the player character, especially their profession and reason for travelling to the location of the game, I was inspired by the Buzzfeed Unsolved : Supernatural web series (viewable here), which was YouTube series produced by Buzzfeed from 2016-2021, that featured two hosts, ‘believer’ Ryan Bergara and ‘sceptic’ Shane Madej, as they investigate sources of hauntings and paranormal activities, often exploring abandoned locations late at night. I was also inspired by The Magnus Archives, a horror fiction podcast created by Rusty Quill (website here) that ran from 2015-2021, and especially the character of Melanie King. Melanie is a YouTuber and paranormal investigator, and her exploration of an abandoned military hospital exposes her to genuine supernatural events, which is what ends up connecting her to the ongoing main story. I think it’s a fun, contemporary profession, that gives a good reason for the characters to be involving themselves in the situation that they do.
In terms of the gameplay mechanics and visual style of the game, I was definitely inspired by the stealth / survival horror genre of games, such as Silent Hill (trailer viewable here), and Fatal Frame (trailer viewable here). These games have players focus on navigating a horrific / unnerving environment and uncovering a story. combat is often de-emphasized, and players have to utilise stealth and problem solving to progress through the games, and to survive both supernatural and more human threats. 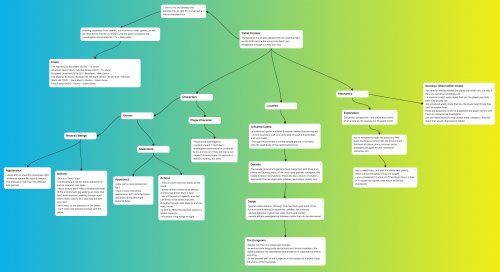