For this week’s premise exercise we were asked to contribute premises that dealt with Light in some way. I contributed two premises to the channel.“​​There's something in the forest, just beyond the flickering edge of the campfire, prowling in the night”, and “The person crept carefully through the darkness, with only the faint light of their phone's flashlight to guide their way”.For both of my premises I was thinking about the interplay between light and darkness, and the way that light could be used selectively to reveal or obscure information. Out of the two premises, I was more drawn to the latter, as I thought the idea of exploring a space using only a limited light source could be an interesting game mechanic. I realised that both of these premises were engaging with the fear of the dark / the unknown, which were themes that I also explored with my previous weekly exercise. I considered changing the idea and working with one of the other premises from the channel, but decided that even though I was dealing with similar themes, I was going to be exploring a different story in a different medium, and so I stuck with the idea.

Using the second premise, I created a mind map (viewable online here) to try and solidify the idea. I started off by thinking about the gameplay mechanics. I knew I wanted the game to focus around the idea of a limited light source, with the player only being able to view a small portion of the screen at any time, with the direction of the light source being anchored to the cursor. I then started thinking about how this mechanic would combine with player navigation. I was initially thinking about the game as a 3D explorable environment, with traditional 1st-person controls, but i realised that this would mean that the light source and player’s camera view would both be linked to the cursor, and that  would fix the light source to the centre of the scene, which is not really what I wanted. I thought about having the player control scheme changed slightly, so that they would have to use different controls to rotate the camera view, but I thought that straying from the typical controls would be confusing for the player, and make the playing experience more awkward.
My second idea was to have a 2D exploration game, where every room / scene had a fixed view, and the player could navigate between adjacent rooms by using the mouse to click on doorways. This would be a lot simpler, especially if the player had a map that was being uncovered through exploration, that they could use as an aide when backtracking through rooms. I realised that I could combine these two ideas, and have the game be comprised of 3D scenes, which would have depth and nice shadows in them, but have each different scene have a fixed camera view, and the player navigation be limited to using the mouse like a 2D point and click game.
Finally I knew I wanted the game to be a short one, so I thought it would be good to have a time-based lose condition. I initially thought about having a battery life component to the light source, so that over time the player would run out of battery, and their light source would get dimmer and dimmer, until the light source went out and they lost the game. I also had the idea of having a ‘fear factor / metre’ which would fill over time, and cause the player to begin to see things moving in the darkness. I thought this idea was a little more playful, and fit in with the ideas of fear of the dark a little more nicely than just the phone light dying.

In terms of the story, I knew the setting would be inside of an abandoned house. When thinking about the reason for the character to be exploring the house, I thought about what  the initial reason for entering the house was, as well as what the overall objective for the player was. After considering a few options, I settled on the player playing as a teenager who was dared by their peers to enter the abandoned / ‘ghost’ house in their town, and find a photo album that was rumoured to be hidden in the attic. I thought this worked nicely as it gives a reason for the player to be exploring the house, and an objective for them to focus on, rather than being just an aimless exploration of the space.

As stated, my work this week deals with ideas of fear of the dark, and fear of the unknown. The more frightened the character in the interactive work gets, the more they project their fears onto their environment, changing the visuals that the player sees. I think the work is suited for an interactive medium due to its ability to immerse players more fully into the experience. By giving layers direct control over navigation through the game world, as well as the ability to control what is visible on screen at any time, it would hopefully draw the player’s more fully into the experience, and heighten the tension they feel as the fear counter fills up, and the visuals begin to shift.

I drew inspiration for my work this week from a variety of sources. Setting wise I was inspired by the game Gone Home,developed by Fullbright, which is an exploration game about a young woman who returns to her family home, and finds it abandoned. The player has to search the house to find clues and unravel the mystery as to what has happened to their family. I was also inspired by the novel Salem’s Lot, written by Stephen King. In the novel, a man named Ben Mears returns to the town of Jerusalem’s Lot, where as a child he had a traumatic experience while exploring the abandoned Marsten house while on a dare, to confront his memories of the place.
For the fear metre, I was inspired by the Terror level in Sunless Sea, developed by Failbetter Games. In Sunless Sea, the player sails through a vast, procedurally generated underground ocean. Terror is one of many statistics the player has to juggle, and one that the player has to try and keep as low as possible, as a high Terror level can increase the likelyhood of negative random events occurring, and if the Terror level maxes out, the player is deposed by their crew, and the game ends.
I was also inspired by the Slow Wave animated short, directed by Andy Kennedy, in terms of visual style, and also the slow descent into nightmarish-ness. In the animation, the scene starts off realistic, and then as the character falls deeper into unconsciousness, the visuals become more fluid and surreal, with the very walls rippling and morphing, until the character enters a nightmare, and the point of view shifts completely. I was definitely inspired by this steady transition from realistic to surreal. I also really enjoy the use of blue tones to convey darkness/ nighttime, and think it’s a lot more visually interesting than using black/grey, and I would use a similar colour scheme for the darkness if I developed the concept further. 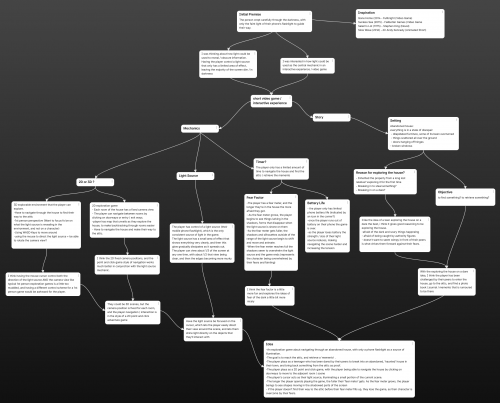