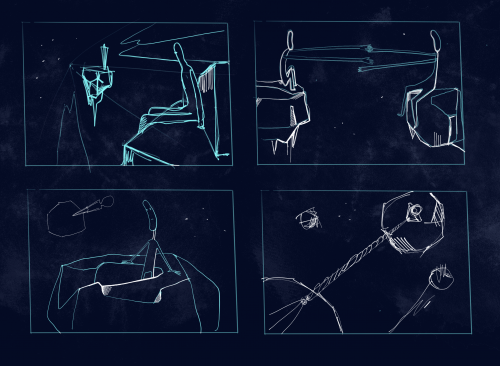 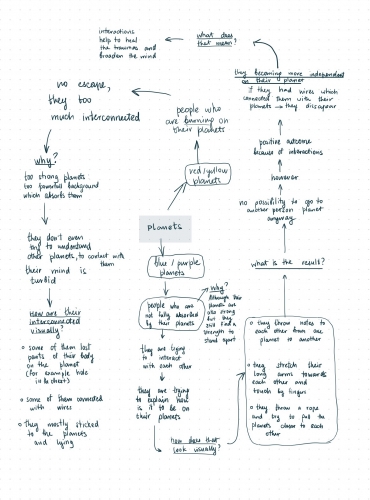 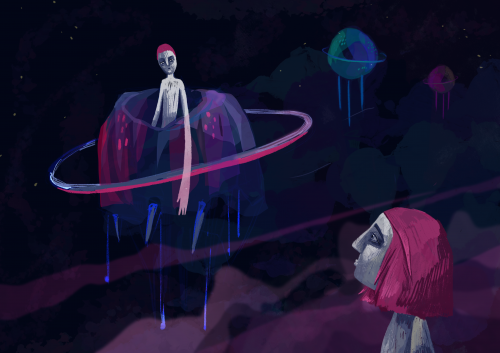 This week we concentrated on the movement of the camera and possible structures-movement through linear and interactive narratives.

My premise for this week is -

In space each person exist on their own small planet. Those people are trying to explain to each other what is going on on their planets and trying to get closer by throwing a rope and pulling someone else’s planet closer to their own. But they still can’t visit each other’s planet.

This premise I want to unpack as a metaphor to inability of people to fully understand each other. Since a person is shaped by their experience, background, environment, those factors build their personality and in this concept - a separate planet. Everyone has their own planet, their own idea and vision of the world. Own psyche and psychological traumas. No matter how hard we try, we will not be able to look at the world through the vision of the another person and fully understand the motives of their actions.

I want to reveal this concept through showing multi-sequential and parallel paths (of different types of planets).

There will be four-five main planets and characters, on which I want to concentrate.

Two-three of them are living on the planets in the mostly warm orange colours. The planets look like they are burning, those people are fully interconnected with the planets. That means that their negative backgrounds are too strong, planets absorb them and obstruct their vision. Those planets block their mind and fully block their courage, freedom and empathy. They incapable of considering other points of view, which means that they don’t even try to interact with other planets.

Visual performance of those people and their planets:

- they connected to the planet by wires

- they look like they stacked in the structure of the planets

- they are mostly stuck to their planets and lying

Two planets are in blue-purple colours. There are people, who are not fully absorbed by their planets. Although their planets are also strong, they still find a strength and curiosity to stand apart. Those people try to be broad-minded and interact with other people on the other planets.

They are trying to get closer, to explain each other how is it to live on their planets. They do it by:

- by throwing notes to each other from one planet to another

Although, eventually they are not able to stand on each others planets, through those attempts they are becoming closer and closer, for example after a while whilst standing on their planets they can hug.

Those attempts to understand and accept each other’s planets lead to the fact that the characters become more empathic, they lose the blocking connection with their own planets. Also visually this exchange can be shown by the appearance of objects from one planet to another and loosing wires, which connect the characters to the planets.

1. The view to all cosmos, we can see different types of planet

2. The camera is moving to the red planets. Planets are also rotating showing the details and people who are fixed to those planets

3. The two blue planets gradually appear from the background, at first they are small in the distance, then the camera starts to approach them

5. Then the camera moves sideways concentrates on showing the distance between those two planets

6. Moves to the second blue planet, we are observing the details on it, the second character is moving slowly (takes a stone observing it)

8. The second character turns around and looks at the first blue planet, the camera now shows his point of view, located behind him

9. We can see that the sound came from the fact that the first character broke something like a crystal. *Two characters look at each other.

As a similar work I want to introduce short animated film 'Kiss.A love story' by Joseph Hudson and Franck Aubry. https://www.shortoftheweek.com/2012/02/09/kiss-a-love-story/ This is 3D animation about the sun and the moon meeting each other. The same as my work it provides the opportunity to observe surreal space by different angles, through different point of view. Stylised landscapes and space invironment capture through the active camera, which is moving very slowly and provides an opportunity to viewer take a closer look to details and dissolve in mystical atmosphere.