For the mind map around brief two. I am interesting to explore the combination or contrast between reality and the imagination.

Around the combination of imagination and reality, I started from 5 ideas here:

In conclusion, those 5 ideas are based on 3 character stories and 2 ‘what if’ hypothesis. I mainly picked the kid’s imagination in the class to do the scenarios design, and did a few sketches by procreate.

This kind of visual design can be seem in many different ways. The film The Secret Life of Walter Mitty(2013) uses a plenty of movie clips to describe the leading character Walter’s imagination and based on that aims to create a sense of gap with reality. The whole story also putted a reversal at the ending of the film to link with the imagination. Nevertheless, the same idea can also be seen in the film Inception(2009). Dream and reality are divided, people rely on ‘the medium’ to back and forth between two worlds. In the dream world, most things are described as exaggerated and vivid.

Not only in the film, but also for animation. To start from the Alice in the wonder land, many creators tend to connect dreams or imagination and reality to create story. There is a disease which called AIWS (Alice in Wonderland Syndrome).

AIWS also known as Todd's syndrome or dysmetropsia, is a neuropsychological condition that causes a distortion of perception. People may experience distortions in visual perception of objects such as appearing smaller (micropsia) or larger (macropsia), or appearing to be closer (pelopsia) or farther (teleopsia) away than they actually are. Distortion may occur for other senses besides vision as well.

Midnight Gospel(2020) as a latest animation, it more tend to be abstract and philosophy, even the reality in the world seems like ridiculous.

Another inspiration idea is the perfect blue(1997), in this animated film, the heroine’ imagination is also used to describe her current mental state and the main reason of stress. In this film, the heroine's spirit is divided into two selves, one is flawless in imagination, and the other is infamous in reality. From the same Japanese film director Kon Satoshi, paprika(2006) use the same descriptive way. A neural device is used in the animation to connect dreams and reality,  which allows the protagonist to carry on the story in two different worlds. 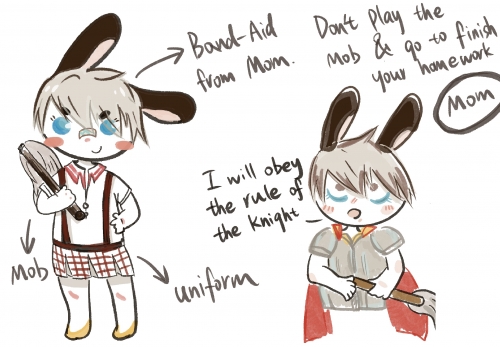