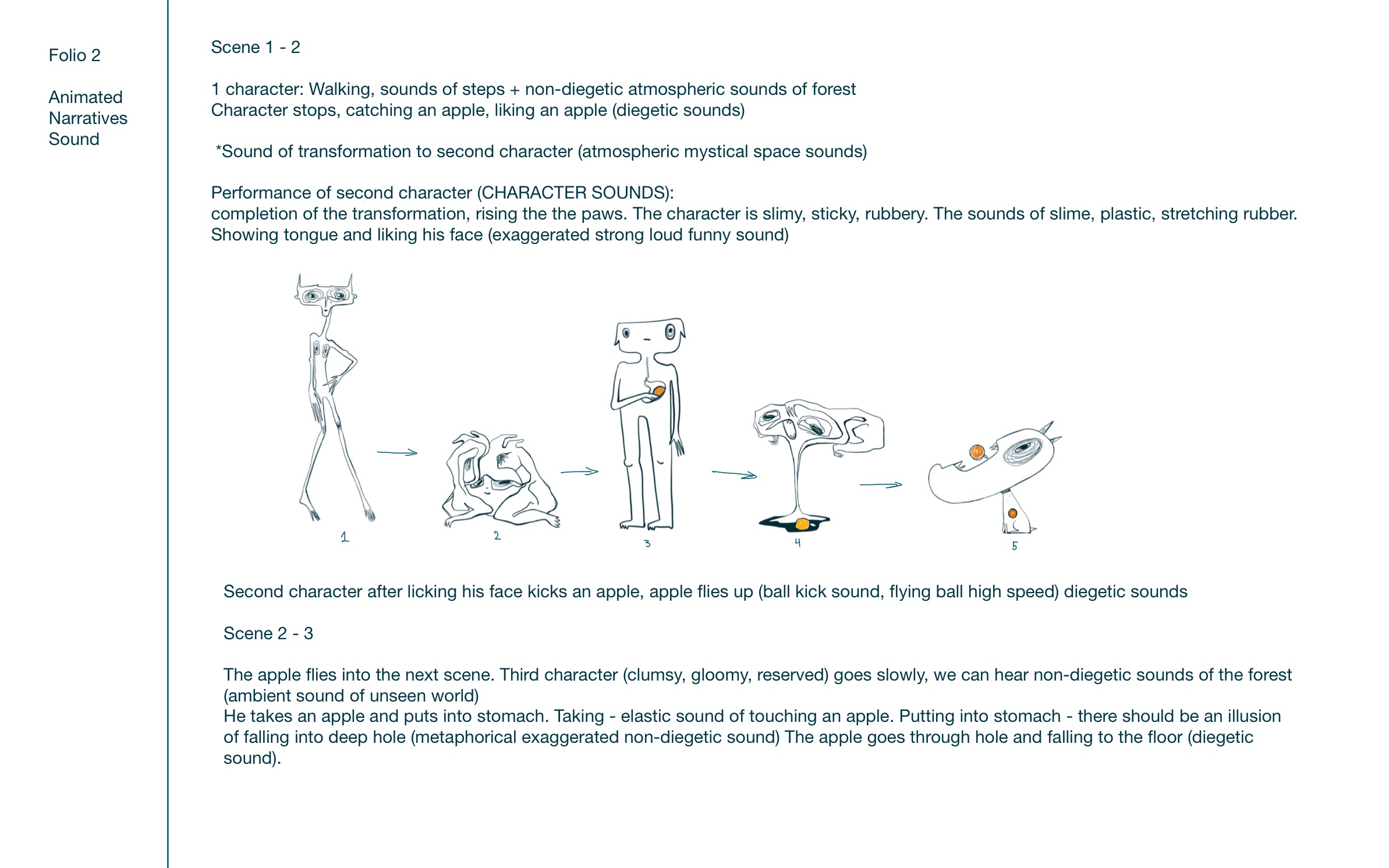 The theme of this week was ‘SOUND’. We discussed the importance of sound in animation. There are two main types of sounds: diegetic (visible source) and non-diegetic (invisible source).

For this week I want to work on my project for Studio 1. I want to choose sounds for scenes 1-3, analyse which type of sounds I need in every particular moment.

My work is a surrealistic animation about mystical forest and its inhabitants, my goal is to show relationship between characters and a place, flora and fauna. Sounds should help to define characters, add humour and atmosphere if so highlight the role of the environment.

For my animation I use:

Sounds of transformation from the one character to another (atmospheric abstract mystical sounds), sounds of the mystical forest (ambient sound effects of the unseen world), putting an apple into a stomach creates an illusion of an apple falling into a deep hole (a metaphoric exaggerated sound)

I’m attaching a video ( https://youtu.be/oMzk80tOzfw ) with the examples of sounds, which I select and search for my animation. As my story is surrealistic non-diegetic, sounds dominate diegetic. I also use exaggeration very frequently to add humour to simple actions, such as licking a face.

In addition, my weekly premises were:

- A chalk drag squeakily across the blackboard to annoy his sister

- A huge block of stone crash on the ground with a squeaky high-pitched scream, then shake off and walked on

- Suddenly he heard the crunch of smashed paper and water splashes. He went to the swimming pool and saw how she wrapped something in a hurry and threw them to the water one by one (the example of unseen story)

- There is nobody here. Only sounds of breaking ice pierce his hearing and brings a feeling of estrangement and freedom (atmospheric)

As a preference work I'm introducing a great example of importance of the sound, it is a stop-motion animation 'Distortion' by Guldies. https://youtu.be/tZqIQmdSa1E Abstract clay objects are perceived absolutely differently according of added sound. So the same cubes acquire characteristics of different materials, sometimes its an ice, a glass, other time they are felt like a slime or a plastic. In the moment of falling and cracking of the clay ball the sound is between a wood or breaking chocolate egg. Sound effects inform us about the change in materiality, texture of objects. Without sound this animation would lose its sense. 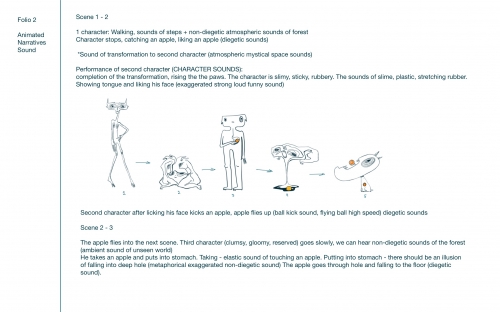