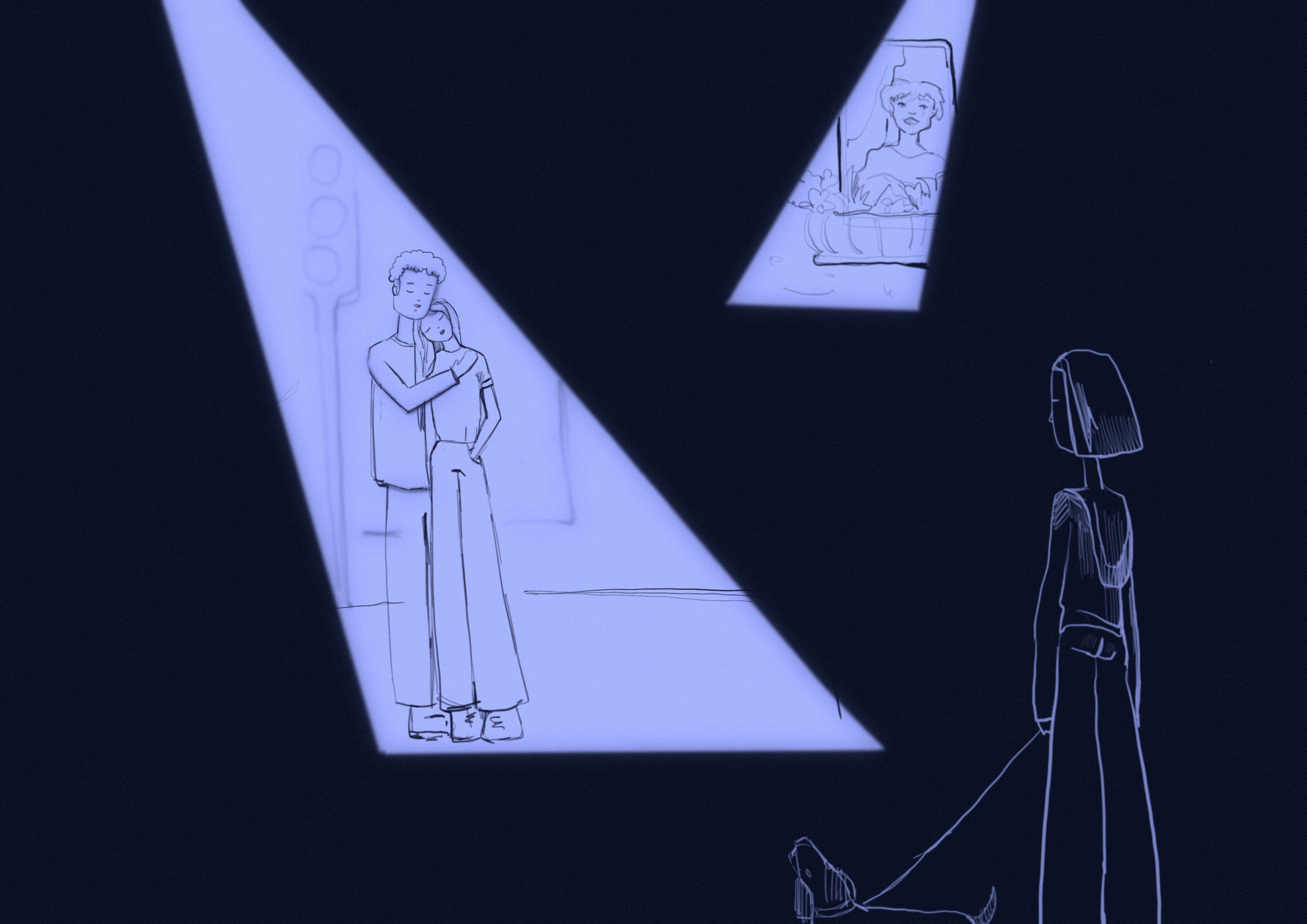 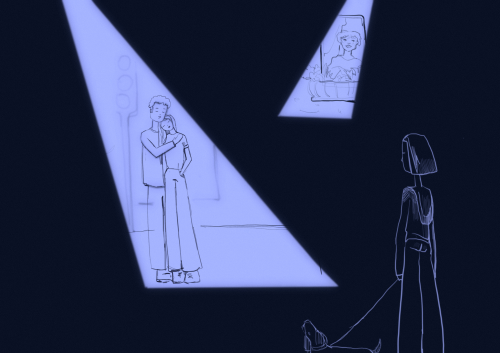 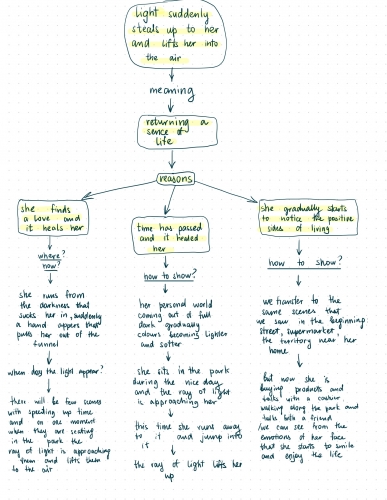 This week we discussed a light as a tool for the communication for the ideas and one of the most subtly powerful and persuasive components.

The premise for this week’s topic was:

For a long time she is observing a ray of light, which is moving and playing, until suddenly it steals up to her and lift her into the air (theme: light)

In this story I want the light to project the characters’ internal space. It won’t have any source, because will be fully abstract. The light in this story is a metaphor for being alive and the main character lost the sense of this feeling, until after a long while she founds it again.

Beginning of the story: After the dramatic shattering event a character looses the light in her world. Everything seems to her covered with a cold penetrating darkness. However, she sees the light, which projects to other people, whom she meets everywhere. All people seem to her filled with life, they have goals, going somewhere, laughing, hug each other and everywhere the light plays with them, lift them in the air, focus on them. The girl observes the ray of light moving and playing with characters in the middle of her absorbing darkness.

Plot: Scenes, where she is travelling and observing people:

- she is at home, looking out the window - a couple meet each other and hug (light)

- once she sees a ray of light, which is not taken by anyone, its playing by itself. She tries to approach it, but it moves from her, the light jumps to another person and fix on it. By those movements she doesn’t desperately try to catch the light, just gently touch it and her fingers go inside of the ray a bit before the light quickly moves away from her.

* then time speeds up, the viewer can observe how scenes by scenes, day by day changing each other with the same tendency - light ignores her and she is also not much is into catching it, observing how the light plays with other people.

- culmination (I described in details further)

Culmination: / suddenly the light steals up to her and lift her into the air /

I’m thinking about the reason and cause why it happened in the particular moment. I’m going to create a mind-map to explore the this.

So, after brain storming I decided to choose the second option combined with the third: time has passed and it healed her. She starts to notice the positive sides of living.

Her personal world (background) becoming brighter and softer, so it is coming out from full darkness gradually with each speed-up scene. In the end we transfer to the same scenes that we saw in the beginning (street, supermarket, territory near her home), and she changes there. Firstly, from her emotions we can see that she is smiling and looks more relaxed, moving faster and more energetic. Secondly, during those scenes she communicates with people: with cashier in supermarket, with a friend while walking along the street, near her home she meets a neighbour with a dog, she pets the dog and talks with a neighbour.

After those scenes we can see how she sits in the park, suddenly she notices a ray of light, which is approaching her. She walks towards it, then starts to run and jumps into it. Now the is over her fully illuminating her. She runs - it runs with her, then she lifts her in the air. They are playing dancing and flying together.

Conclusion: In this story the ray of light is a subjective component of the narrative, which pays the main role. This is a story of overcoming of a mental crisis and returning to a stable psychological state and that sometimes we just need to get through that and allow the time to heal the painful feelings. The light in the most cases returns to us.

As a reference work for my story I want to introduce the musical clip of Bonobo “No reason”. https://youtu.be/ebzEEEdjHj0 Although its not connected with light it provides a feeling of loosing a reason of leaving through amassing surreal transitions from one everyday routine activity to another, while living in a tiny room in Japan.

As an example of animation, where the light is a powerful component I want to introduce the short animated film by Karolina Chabier “DANS LES BOIS”. https://youtu.be/gnWsHXVhVCM In this work the light defects our eye as a viewer, by concentrating on the main event. Natural light of the moon and the fire are main sources which are essential atmospheric and range elements.