A world without sunshine. Sunlight is only seen in desert areas. People use glass bottles to collect light every week. (for lighting). (Light can be sold. Store sell bottles with light.) (From Celine)
1 This story was chosen because of an interest in the concept of collecting light. It also expands on why it is important to collect in the desert.
2 We discussed why we collect light and what we need to do once we have collected it. The main purpose was to explore the darkness.
3 Background: The earth has stopped rotating and the sun can only reach desert areas. The world is plunged into darkness.Plants and animals in the darkness die because there is no sunlight. A decade passes and scientists invent a material that collects light. about portable light, maybe this light source will be bottles, but they have limited time of shining. Go explore the darkness. Players need to keep collecting light.
Genre: Survival, simulation multiplayer game
Gameplay:

This work examined the concept of lighting. By expressing the apocalyptic world in which the Earth has stopped revolving, players have to collect light to rebuild their civilization.

Similar work is Don't Starve, produced by Klei Entertainment. The game is a survival game where the player needs to collect and spend resources wisely in order to survive in the forest.

Through the feedback from Kate, focusing on watering the world with light mechanisms would be a greater start. Our original intention was a discovery and survival game, but we could actually make it simpler like Splatoon, the player needs to tint the world with fluorescent materials and relight the world to discover the secret of the world. 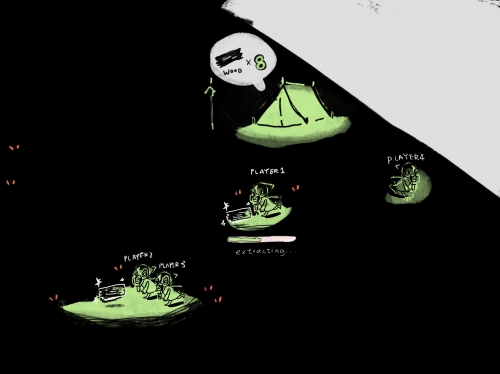