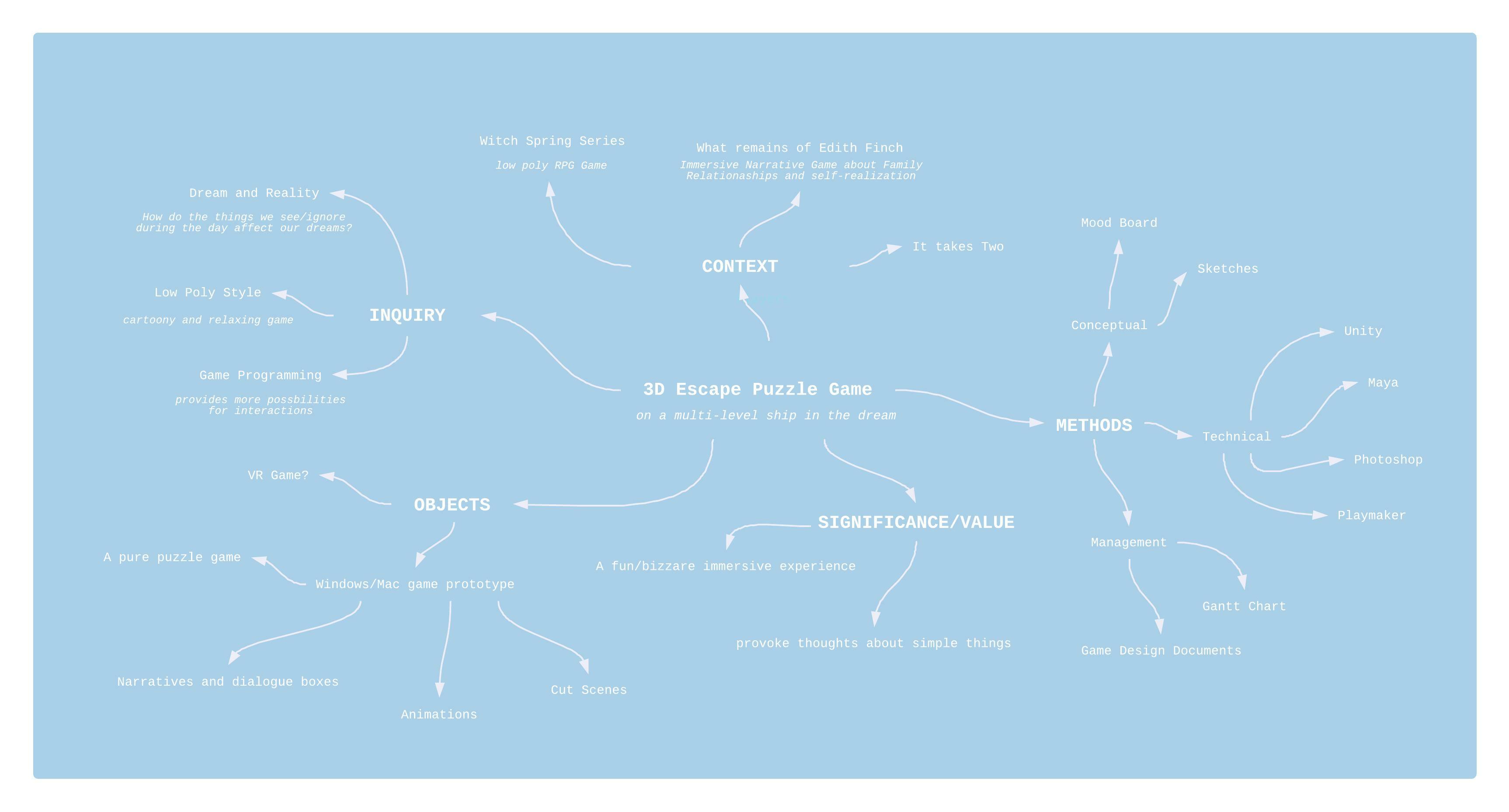 RATIONALE
Why are you doing what you are doing?

For my second studio project I would like to make an escape puzzle game that explores dream and reality, specifically the premise of what if the things we see/ignore during the day appear in our lucid dreams?
I want to create a multi-level ship in a stormy weather as the main scene, not only because I’m interested in the structure of ships, but the idea of being on a small terrain surrounded by water builds more tension and is fun to play with.
I have experience in making various 3D games. However, this time with the theme being dream and reality, I want to ponder the use of different daily objects and how they can be presented in the game in a weird way, and challenge myself to focus on making logical, meaningful puzzles for a fun, cheerful, quirky, low poly style game.

CONTEXT
Who else is doing what you are doing?
My inspiration mainly comes from the game I played recently called It Takes Two, which is an action-adventure puzzle game developed by Hazelight Studios. The story follows a family in which the parents are going through a divorce. The daughter of the family wishes the parents wouldn’t get divorced and in doing so, casts a magical spell upon the parents, turning them into her two toys that are based off them. The gameplay focuses on cooperation and making use of household items to break the spell and save the family’s relationship. All the items within the environment are well thought out and are nicely tied together with the theme.
Some other inspirations include the art style of Witch Spring game series by Kiwi Walks, a low poly RPG game with cute art and characters. The story and game design of What Remains of Edith Finch, an immersive adventure narrative game by Giant Sparrow about family relationships.

METHODS
How will you do what you are doing?
Since puzzles make a big part of the game, I will prioritize on getting the core mechanic working first with simple objects using Playmaker along with scripts which will be a new thing for me to learn.
Within the first few weeks, I will research and sketch the conceptual design of the game environment and the layout of each level. Then, I will be using Maya and Unity to model, assemble the game and build the scene. Lastly, I will document the process as I create and share it with my peers.

OUTCOMES
What are the tangible objects that must be made to articulate success?
My goal is to create a Windows/Mac prototype with instructions, interactions and simple animations. The significance/value of this game is that by creating a fun, bizarre immersive experience, I hope to provoke some thoughts about the simple things in life that we tend to overlook.

What Remains of Edith Finch: https://www.gog.com/game/what_remains_of_edith_finch