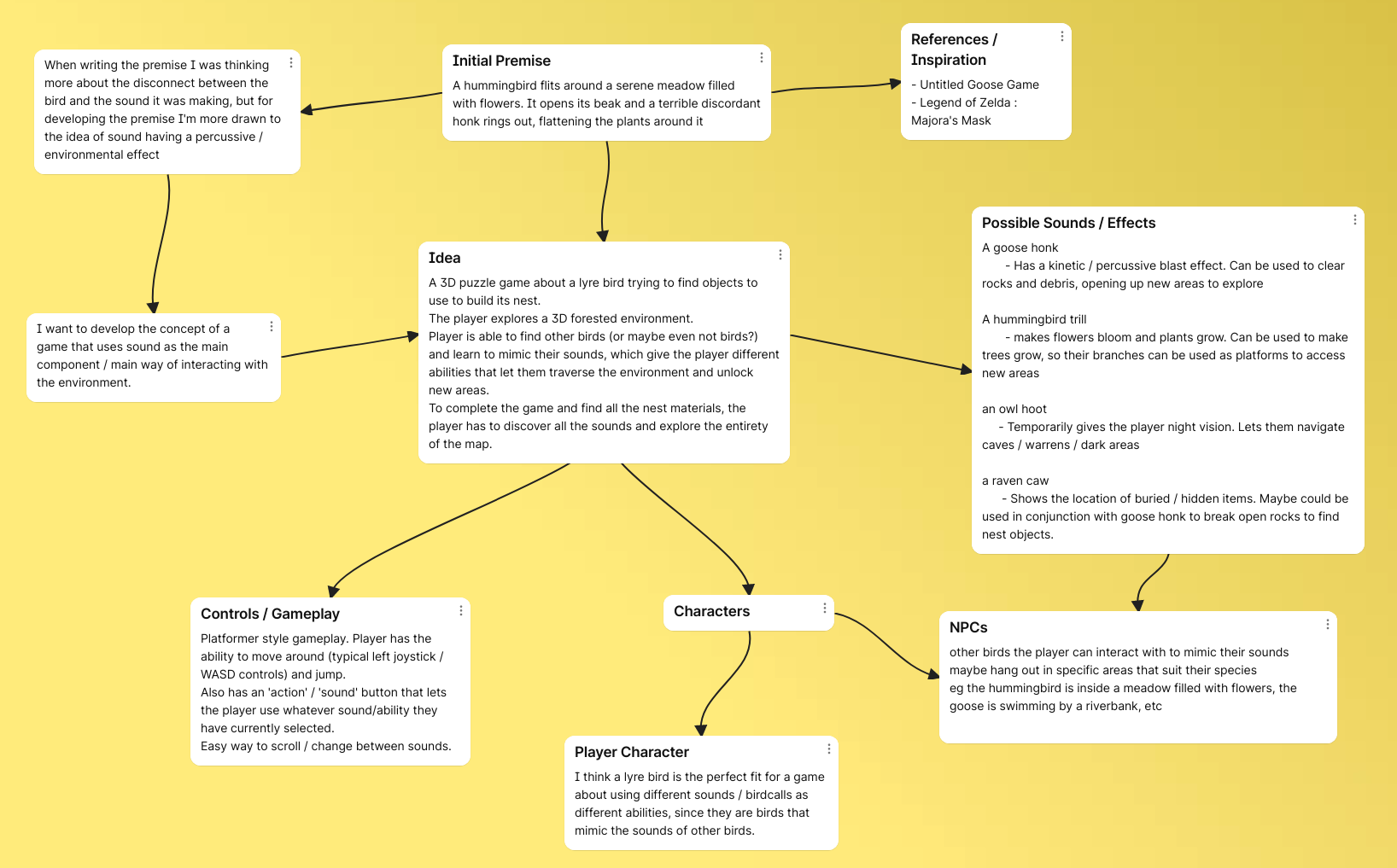 For this week's exercise I (once again) decided to continue to develop my own premise from the weekly premise channel, which for this week was “A hummingbird flits around a serene meadow filled with flowers. It opens its beak and a terrible discordant honk rings out, flattening the plants around it”
When writing this premise I was mostly focusing on the disconnect between the small, delicate form of the hummingbird, and the harsh, honking sounds of the goose. When thinking about this further; taking into consideration that I wanted to develop more ideas for interactive work for this class, I decided I was more drawn to the kinetic element that I had established in the last part of the premise, with the sound having a visible impact on the environment. I decided I wanted to take the premise and use it to develop the concept for an interactive game, where different sounds give the player different abilities they can use to interact with the world.

I (once again) began mind mapping out the idea (viewable here). Given my original premise was about a bird, and I wanted to the player to have the ability to produce different sounds for different effects, I thought that a Lyrebird would be the perfect bird to use as the player character, given its status a mimic that copies the sounds of other birds / environmental effects and incorporates them into its call. Lyrebirds are also noted for their elaborate nests, which often incorporate plastic and other pieces of human refuse, so I thought the game could be able exploring an environment to find the materials needed to build the lyrebird’s nest, and the player has to unlock the various birdsongs with their unique abilities to be able to fully navigate the environment, and find all of the nest components.

My focus for this week’s exercise was on sound (obviously), and the way that sound could be used as the focal mechanic in an interactive work. Thematically I feel like the idea I settled on is quite simple, focusing on an animal’s natural instinct to build a home for itself.

Given that this concept is a game about playing as a bird, a major inspiration would obviously be Untitled Goose Game (trailer viewable here), developed by House House and released in 2019. In the game, the player plays as ‘a horrible goose’ who terrorises a sleepy English village, with a list of tasks to complete in each ‘’level’ of the game. Playing as a goose informs the actions that the player can make, two of the major ones being the ability to flap their wings, and to honk loudly at the various human NPC characters who obstruct the characters progress.
Another inspiration in terms of gameplay mechanics is the Nintendo game Legend of Zelda : Majora’s Mask (trailer viewable here). In the game the player has the ability to swap between a variety of different masks, which each give the player a different appearance and set of abilities. The game is more of an action adventure game, but there are puzzle / platforming aspects to it.

Sound tends to be the component that I think about last when it comes to designing interactive experiences, as I don’t have much of a background in working with sound myself, and I’m generally more concerned with the visual aesthetics and the gameplay / story. Thinking about designing an interactive experience around sound as the main mechanic has been a good approach, as it’s meant that sound is the focus rather than just an afterthought, and the elements end up being more cohesive as a result. 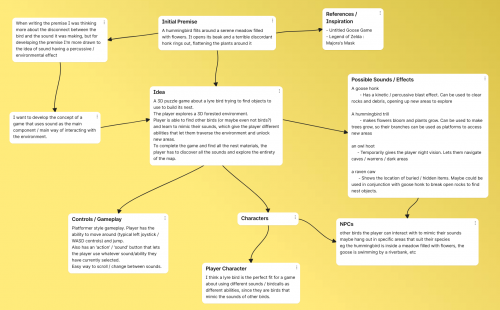