I've made a small game prototype which uses several of the mechanics I've built through the Advanced Play Design module (where applicable). The objective I've set for this module was to build one mechanic per week in order to make a bigger product by the end of the semester, here it is!

To be very honest, I'm not as happy I thought I would be with the outcome. My wish was to have a more structured game and gameplay, but the variety of the themes made that goal really hard to achieve.

From the beginning, I followed an approach similar to Rapid Game Prototyping, but a lot more crude and risky.

Instead of evaluating the new mechanic I have prototyped as part of an ecosystem of mechanics, I would rather go straight ahead and implement it as soon as it's stable and passed the playtest. As part of the weekly objective, I would create a demo scene where I could explore that mechanic on its own and multiple possibilities it can provide.

I've only really tested mechanics working together when building the archive, which tried to demonstrate how those would combined into something greater and fun.

Additionally, some work like Play and Observation and Play And Places were just irrelevant to the final product since the scope of this project didn't really allow for a setting to take place.

Regardless, I really like the approach I've taken on this module and I think that when stuck on a project, having this approach definitively helps finding solutions. Looking at the work of some people who have gone through Protober (one prototype a day, every day during november) such as this human http://www.harsanalif.com/protober/ , it would be possible to create a game with minigames rather than a game with many mechanics. 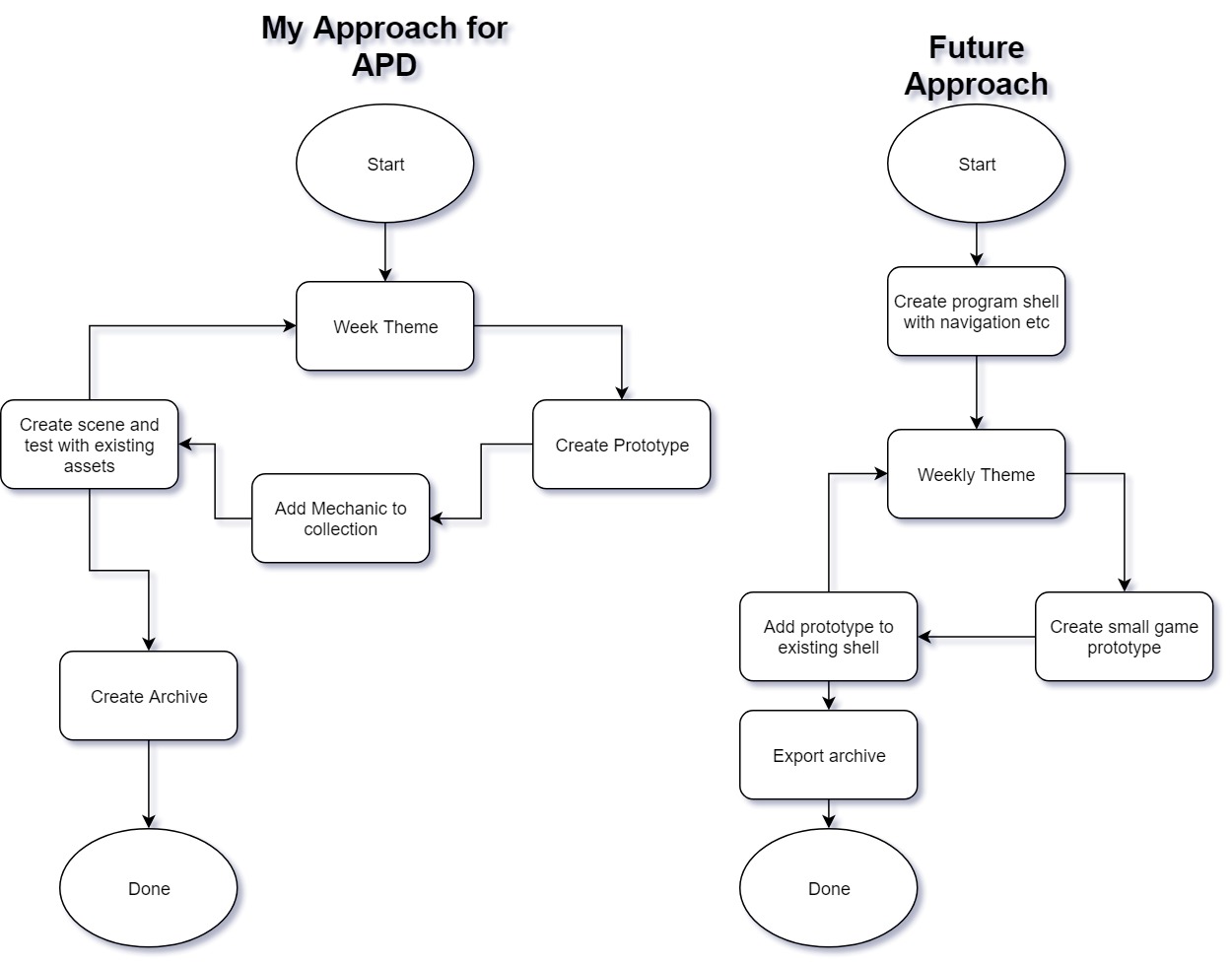 Anyhow, below are the links to all my APDs, and attached is the video of the level combined!

Here's a easily accessible list of my work produced for Advanced Play Design.

Week 01 - Play and Observation
Creation of a mechanic where the camera can be affected based on what portal the first person character walks throuhg.
http://magistudio.net/work/apd-week01-play-and-observation

Week 04 - Play and Place
Creation of a mechanic where the third person camera is affected based on location, including smooth transitions between chain of effects.
http://magistudio.net/work/apd-week-04-play-and-place

Week 05 - Play and Forces
Creation of a system where a song can control the generation sequence of the level design. Also, usage of AI-generated soundtrack.
http://magistudio.net/work/apd-week-05-play-and-forces

Week 08 - Play and Audience
Creation of a system and mechanic where certain actions from the player would be recorded in a package to be evaluated by a "digital jury". In short, a way to grade the player based on his performance according to certain criterias, such as time, jump count and fall count.
http://magistudio.net/work/apd-2

Week 09 - Play and Materiality
Creation of a mechanic where the player is able to write on a surface by walking on it, each feet separately. The written data can be used in shaders (like footprints or material blending).
http://magistudio.net/work/apd-week-09-play-and-materiality

Week 10 - Play and Stillness
Creation of a mechanic where the player is required to stare at or look away from a door in order to open it. This mechanic comes with an eye animation on the door inspired by Antichamber.
http://magistudio.net/work/apd-week-10-play-and-stillness-8