When audiences touch the tree, the leaves would grow on the parts which were touched on the wall behind the tree.

Used LDR as light sensor to show or hide the butterflies.

Set up a small installation by using the object around me to bring people more immersive and realistic feeling.

I did two tests. In the first test, I used an LDR as the light sensor to show or hide the butterflies on my computer screen and the mouse could catch or free these butterflies.

In the second test, I projected the butterfly on a wall and used some objects such as a small plastic box and bowl to set up a small installation in front of the wall. I placed the LDR sensor in the middle of a paper, and then put the paper into the small plastic box. So when the paper was crushed in the box, there was dark and nothing showed on the wall. When I opened the paper to let the light in, the sensor detected lights and butterflies showed on the wall. At the same time, the box's and paper's shadow showed on the wall as well because the projector's light was very strong. Therefore, it looked like the butterflies flied from the paper.

In the beginning, I did not have a specific aim because the theme this week was tinkering. So I just wanted to try the Arduino light sensor which would be used in my studio 3 project as well. So I did the first test which focused on the interactive mechanics. When I finished the coding part and tested it, I found that it would be more immersive and attractive if I made it become a small installation. So I did the second test which focused on how to make the visual effect more realistic. 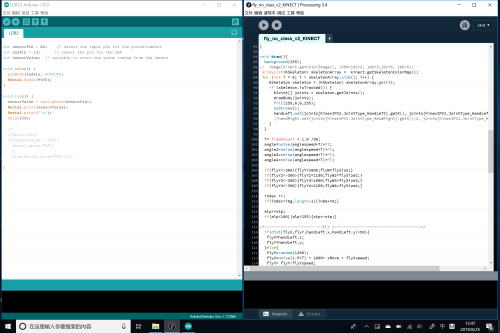