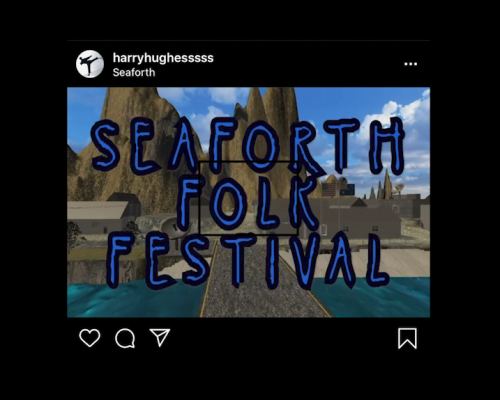 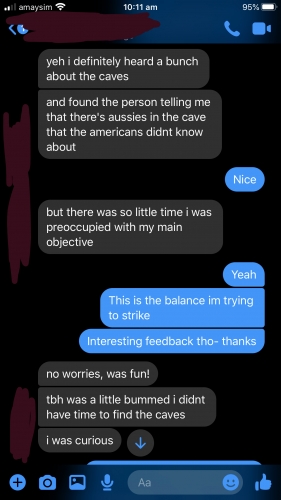 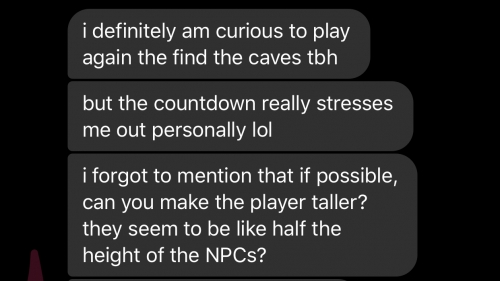 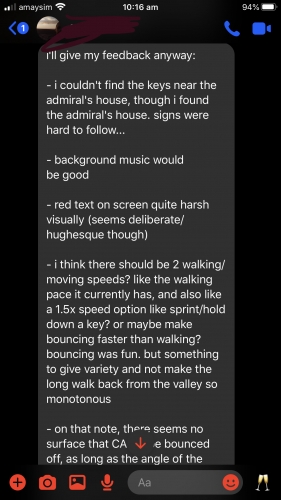 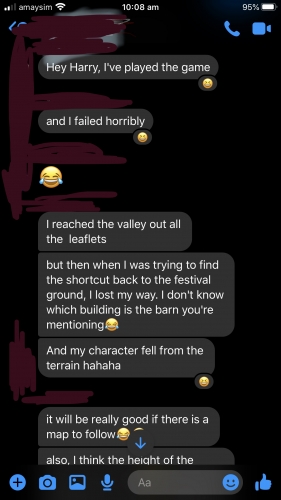 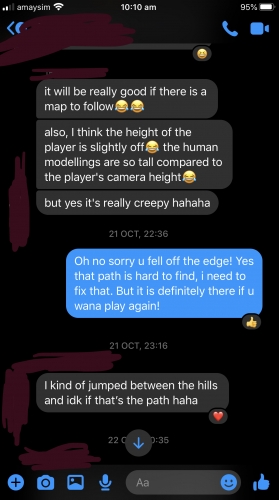 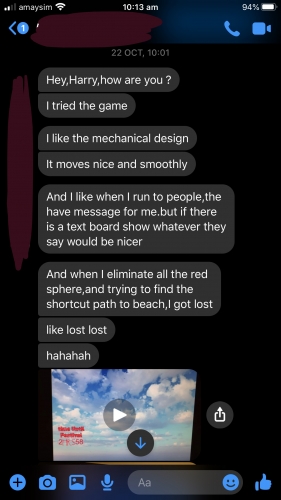 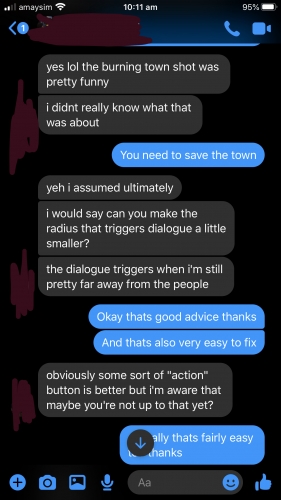 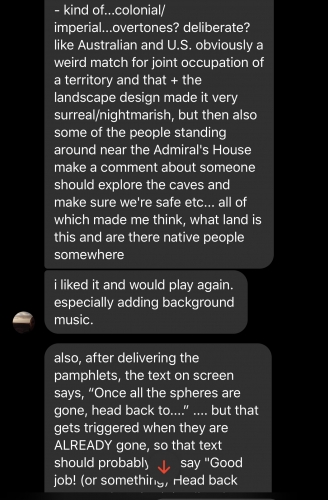 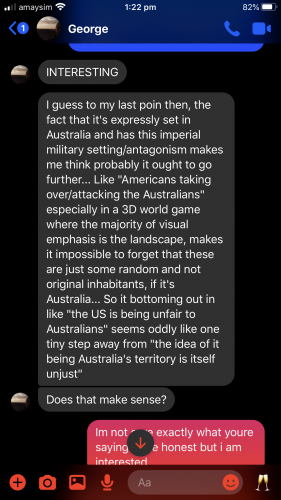 I realised I needed some people to “playtest” my game. I honestly don’t think that that idea crossed my mind after making and releasing my Folio 1 games, so this may seem like a positive development. But really I think this is just because Seaforth Folk Festival is a much more complex experience than my first few games, and I needed to know if the clues and messages I had left were easy enough to follow and make sense of. So I made a trailer and posted it to my Instagram.

In SFF you have a strict timer, a large map, and some very specific instructions. However, the last of these instructions is a dead end where you are asked to find an object that doesn’t exist. My ideal player would realize this, and therefore decide to go off and do their own thing instead. In fact, this is the only way you can “win” the game; ignore the messages the game is telling you, pay attention to the clues telling you about the caves somewhere on the map. Once you find them, you have essentially won.

The idea behind this is that the people your character is working for, and by extension the impetus behind the mission texts that appear at the top of the screen, are the bad guys. They’re the Americans and the other characters, the Australians, are the good guys. If you follow all the instructions you’re given from the start, you will go down to the Australian’s town to remind them about the festival and along the way encounter several Australian characters who are deeply angry at the Americans and skeptical about the festival. You then return to where you started and are given a new mission to find the set of keys for the Americans. When the on-screen countdown gets down to zero, the game cuts to a screen where you see the village town burning, a message saying “You didn’t save the town” and “Look Beyond”. I had hoped that players would realise the Australians’ town was burning because of the Americans, and then on next play through ignore the instructions given by the Americans and try other things, like, maybe, finding those caves that multiple non-playable characters have mentioned, but the feedback I’ve received so far has suggested that this has not worked as planned. In fact, none of the four people who have given feedback have beaten the game!

There are a few major issues here that are preventing this. Firstly, the fact that the keys don’t exist is very complicated. This functioning properly as a story element relies solely on the player figuring out that the keys don’t exist, which, in a massive map, is extremely difficult to reconcile. The NPC tells you they think the keys are near the Admiral’s House, but even if you find the Admiral’s House (which most people did not), I can understand it is extremely difficult to declare there are no keys anywhere. Players told me the countdown in the corner was a little intimidating. I had asked if they had considered exploring the map further and maybe looking for the caves, and a couple of them told me they felt too time-pressed.

A way to improve this is to extend the countdown, so that maybe players feel a bit more freedom. They may not find the keys after five minutes, and then just think “okay, let’s see what else we can see here”. So I’ve extended it now, and it lasts over 13 minutes. Plenty of time.

I had thought that players might get to the end of the first countdown and then just decide to start again. Unfortunately, I don’t think anyone tried this, I think they all gave up after the first try. This also speaks to the point that all of the players knew that I am fairly new to game making, which means they’re likely to think that if the game does not at first seem simple, then that probably means I have made it incorrectly. In fact, one play tester asked me if I had ever won the game!

But another major problem preventing this was that sometimes when Unity changed scenes the cursor seemed to get “locked” and the player could no longer move the mouse around or click anything. I managed to fix this with a little help from local legend Sahaj.

I needed to make restarting perhaps more intriguing, quicker and easier. Now, when players restart, they’ll get a message saying “Don’t listen to the Americans”. This is a little too obvious for my initial taste, but I would prefer a clear message to people just giving up straight away. It also does not completely solve the lack-of-keys issue. Somehow this task needs to be more open-ended, like “you can look for the keys, or not, it’s up to you” but again this all seems like too obvious of a clue for my taste. One of the play testers told me “the player is always right”, and I suppose that is correct, but if I change the game too much is it even my game anymore? Also, am I being too stubborn?

My favourite piece of feedback was that someone told me the game reminded them of another game called Pathologic, and they kindly linked me a 2 hour analysis of the game. In Pathologic there are many instances of the game conspiring against the player, with misleading clues, side-missions that lead to dead ends, and constantly changing parameters in which your character exists. Watching this analysis video, I can see that the game is a revelation, a strange and intricately detailed and researched experience. But I’m not sure if I would actually enjoy PLAYING the game, and indeed this YouTuber outlines how the developers were basically trying to make the experience as difficult as possible for the player, and, you know, difficult experiences are … bad. But I love the idea of a Russian game that is almost impossible to enjoy playing but that is so richly detailed that it is hugely rewarding to persevere through. I prefer that idea to a richly detailed game that is fairly easy to access, like Skyrim. Hmm.

There was also some more simple feedback:

Then, one friend who is doing a PhD in philosophy sent me a lengthy text (not pictured) about the colonial implications of the game. I can totally understand his concern here. The only characters are either “American” or “Australian” and the game is set in “Australia”, but nothing more is mentioned beyond that. I can definitely see that talking about countries invading or taking over an area (the Americans are trying to get rid of the Australians) has so many deeply loaded implications, and there are simply so many aspects to this that seem to need justification and explanation; indeed, there is certainly no mention anywhere of Aboriginal people, and terms like “locals”, which is how the Americans refer to the Australians, are extremely controversial.

Reading my friend’s message though, I was struck by the feeling that everything he was saying the game “does” was actually an intentional choice that I made. The game is supposed to be a nightmarish and creepy parallel world. I am also having fun with the oversimplification of using terms like “Australians” and trying to create a strange atmosphere where the player is forced to question what all of this means. Again I am reminded of the idea of not wanting to make the game too easy-to-understand or -access. I want the game to get into the player’s minds and make them uncomfortable, so I was slightly offended that my friend didn’t seem to realise that this discomfort he experienced was there because I had made it that way. Maybe this is another thing that players will have more faith in once they know that I am an experienced game maker.

Anyway, I am extremely grateful for all this feedback of course, and am pleased to have made something that is discussable.

Please check out the trailer, run-through, and the game itself !