Moodboard for IOL. Gathering of all relevant sources/ materials for Home to date, and possible projections, along with KEY TERMS. 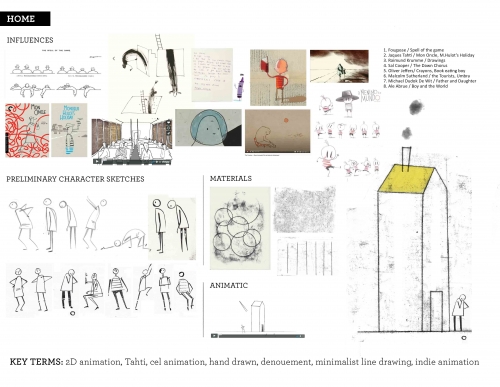 Look at Raimund Krumme;   https://raimundkrumme.com/ (Love what I’ve glimpsed at).

1. Not clear on initial predicament. Required a second viewing to comprehend. (A persistant issue.)

2a. Window comes to read as a slab/solid object. Reminds me that in an earlier iteration the window grows increasingly heavy but as a symbol of the weight of the issue. This was to affect the way in which the character was able to move it.

2b. Can the window change perspective in line with the changed perspective on the side of the house? What happens if the window skews slightly? What will this introduce into the world??????? PURSUE.
> And add footage of collapsed house as the outcome that I didn’t want.

3.  SCALE. The foot through the wall is hard to see/read. Slow trucking in of camera? What could this achieve? “Incremental zoom in cfr static shot”. Greater access to details. Loss of smoke? Smoke can be reconfigured but would lose some of the airiness of the space. PURSUE.

4. Increase space between CH and building when it is looking at the building. Think of the silhouette. Occupy more of the space. PURSUE

5. Add a longer pause before the last scene/flowerpot.

6. Could add a little more drama to the trip up with the ladder when CH enters. Aligned with CB.

7. Add some more time/space in CH’s contemplation/interaction with the fallen ladder. Thinks – walks over there – pauses and looks over – then bends down and collects. Could pick up one and contemplate it? Then collect all. Make this a turning point in the ACT II.

8. THE TOSS; mirror the ladder scenario – a little ungainly, lift the ladder and depict the weight of the ladder – stumble/balance – an accidental toss. Existing toss is too accomplished, too easy.

10. Nick wants SOMETHING more UNEXPECTED to HAPPEN. He has placed the ladder within the roof space. Discussed problem with the need to then fill the ladder with white, which seems to break the rules of the world. But maybe this has already been implied through the fact that CH does enter a building without being seen within. So an implied solid does exist. Swan moving across/through line to reverse out.

Link to removed sequence - Collapsing Home. Going down this path would either alter the outcome (the whole storyline), or would entail too much story time returning to the storyline. https://vimeo.com/443305172