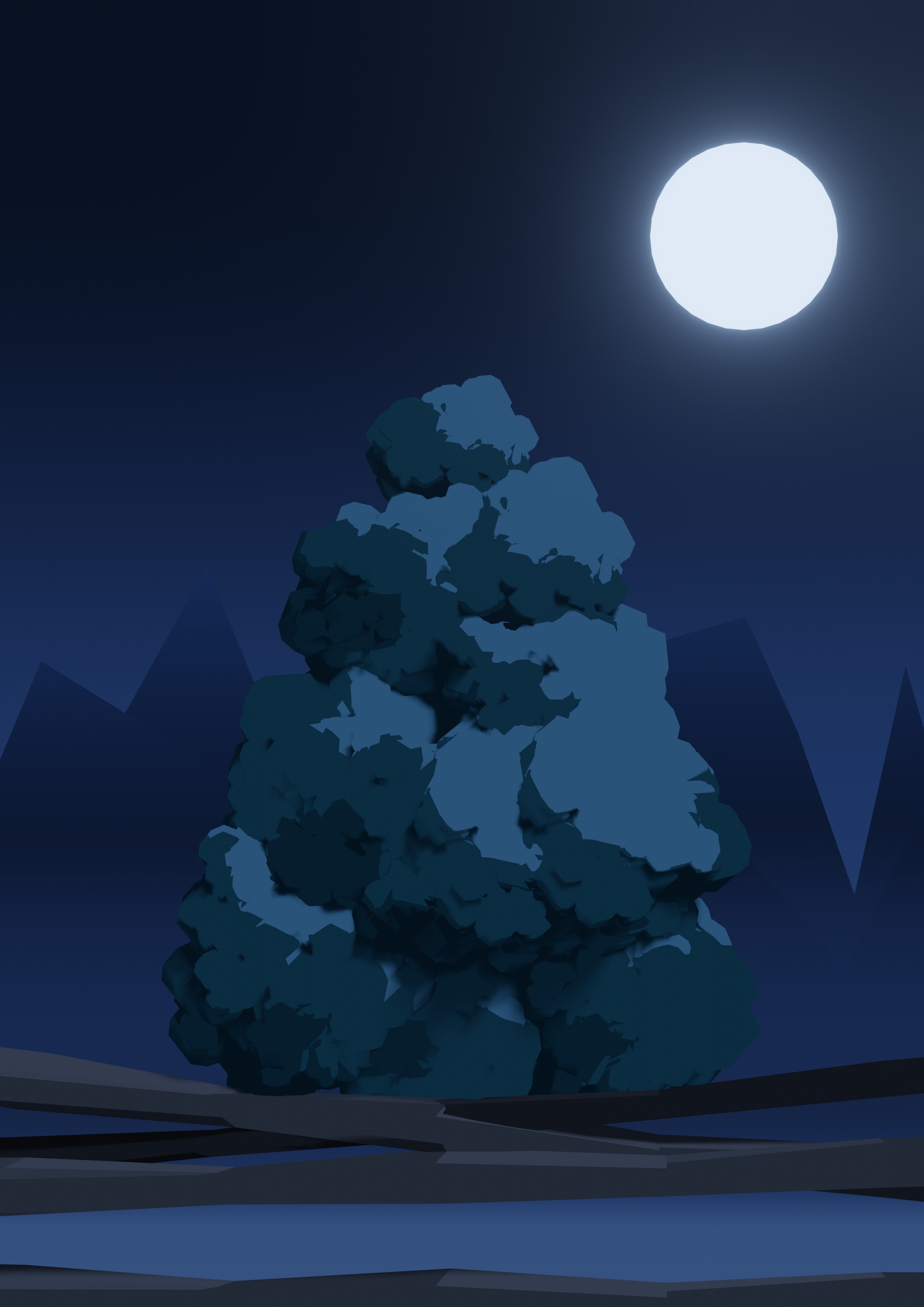 When brainstorming about Play and Stillness, the first thing that came through my mind was actually a scene in Totoro where Totoro is standing at the top of a tree and looking at the moon. Something about that scene is so breathtaking and relaxing. Even though everything is still moving in that scene, it looks like it doesn't move much. It reminds me of the relationship between nature and humans. For example, when you compare the life span of a human to nature, it seems as though nature never changes. It fits the idea of Stillness very much. Therefore, I decided that I wanted to work on something that relates to nature.

Welsh said in his 'Notes toward the Concept of Contemplative Gaming' that looking at a painting allows us to 'think about the world it envisions.' (Welsh 2012) We could then make associations, explore the world, and unleash our imagination, hence, make an emotional connection with the painting. I wanted to construct a relaxing experience of just looking and playing with my game/interactive artwork this week. That's why I wanted to give an illustration style game/interactive artwork a go and see how it works out. Would it affect the player as a painting would affect a by-passer? As my inspiration is Totoro, I decided to work on this week's response in a similar illustration style. Also, I wanted to work on something with a more desaturated colour scheme. As the emotion I wanted my work to engage with is relaxing, a vibrant tone would do the exact opposite.

To further play with the idea of stillness, I added the idea of having a character moving non-stop on-screen. When the player presses a certain key, then the character stops moving. This idea actually came from walking in the city, where everyone is busy rushing here and there. It reminds me of how busy we are every day and how easy it is to forget every little moment of life. That's why I wanted to create a game/interactive artwork to remind people of that.

I decided to use another approach for this week's response. Instead of doing an AR interactive artwork or a game in 3D space, I decided to work on something 2D. I wrote down the flowchart for this week's response and then tackled each section step by step. Before I started coding in unity, I built the scene in Blender and rendered it out as the background of my game. I also created all the sprites (images for 2D game development) in Blender. This workflow allows me to create assets quicker. It also allows me to adjust the colour of the assets altogether to get a harmonious look. It provided me with the chance to preview my weekly response before I completed it.

I spent approximately 8 hours coding for this game/interactive artwork. It's different than coding in AR. For example, I no longer need to consider the space as 3-dimension. I could easily use the point on the screen with just x and y coordinates. The only way the z-coordinate came in is when I tried to layer the border of the game on top of the background. Setting the z-location value differently in the properties panel allows me to arrange the order of the images that appear on the screen.

There were two bits of coding that stood out to me. The first piece of coding allows the character to walk non-stop on screen unless the Space Bar is pressed. It's different from most games as most of the games require the players to press the arrow keys or ASDW in order to control the character walking movement. To do so, I set the movement value to -1 or 1 and only set it to 0 when the space bar is pressed. The positive and negative value of the movement will dictate the direction of the character, e.g. positive for right and negative for left. The second piece of coding allows the player to spawn one firefly per second. I learnt to use a function called InvokeRepeating. By setting it in an If function, the player could only spawn fireflies when the Space Bar is pressed. When the player releases the Space Bar, the fireflies will be set to fly away.

After finishing the game/interactive artwork in Unity, I researched a little on how to export it as a WebGL so that more people could experience this work. As it is not a 3D game, I didn't face as many problems to build it out. The only thing that stopped me for a while is researching on how to upload the game to the web. I looked into the website Kay uses to upload her works and decided to upload it on that platform as well.

'When the Forest is Asleep' allows the player to interact in two ways. The first one is to do nothing and just use your eyes and ears to enjoy the work. The character will wander around doing its own stuff. The second is to press on the Space Bar. Hold onto it as long as you want and enjoy the beauty of nature.

I hope that anyone who plays with 'When the Forest is Asleep' could get a moment of relaxation!

Reading the articles about the contemplative game and the zen game has opened a new door for me. I know that some games could be relaxing, but I never know that they have their own game genre. To me, I like to play games that are more relaxing as I don't want to get another highly-concentrated session outside of my study. This game concept suits my idea for Play and Stillness well as I was going to create a game/interactive artwork that encourages people to take a step back from their busy lives and focus at the very moment and relax.

As mentioned in the article 'Persuasive Games: Video Game Zen' written by Bogost, 'the games that design for meditation explicitly prove less effective than those that use other design strategies.' (Bogost 2007) They are either asking the player to control their body in a very precise way (e.g. regulate their heart rate in 'Journey to Wild Divine'), or force the player to focus on the control of the game with accurate body movement (e.g. controlling the mouse with high attention in 'Cloud'). These high-attention games are asking too much from the player and unavoidably fail in relaxing their player. Hence, I tried to balance out the proportion of 'leaning forward' media and 'leaning back' media in this work so that it is not exactly exhausting to play with or not having entirely nothing to play with at the same time. It is said that 'leaning forward is useful when the desired effect of a game is high-attention and twitchiness' while 'leaning back is associated with relaxation, passivity, and even gluttony.' (Bogost 2007) I would like the player to focus on my work with their eyes and ears but feel relaxed as a reward.

That's why I created a game/interactive artwork that asks the least control from the player. This simple control design was actually inspired by the Gardening games 'Animal Crossing'. The player of Animal Crossing often repeats one action over and over again. The action of repeating can sometimes be therapeutic and relaxing. The effect could be doubled when the visuals and the music have positive feedback to the player. Thus, I played with the visuals on screen and selected a piece of relaxing music as background music. When the player presses the space bar over and over again, it pauses the movement of the character, and some fireflies will grow on the tree. When the space bar is released, the fireflies fly away. It would, hopefully, stimulate the player to repeat the action.

There is another interpretation of the game/interactive artwork on the topic of Stillness. 'When the Forest is Asleep' also encourages the player to do absolutely nothing, just sit still and relax, listen to the music while enjoy watching the little character on-screen moving from left to right of from right to left. In the meantime, the moon slowly glows in the background. However, doing this might shift the nature of this project to pure 'leaning back' media.

After I finished the project, I came to the conclusion that this project is not exactly a game as it doesn't have much gameplay. It feels like it is more of an interactive artwork that explores the properties of contemplative and zen games. I wish to develop this project more and hopefully, make it into a simple interactive installation. For example, the input system could be a stress ball instead of a Space Bar, where the longer the player squeeze the ball, the more stress the player will release, the more fireflies will grow on the tree and the more beautiful and breathtaking it will be when the player is no longer squeezing the ball. Or, it could be developed so that there is a stepping box that detects the movement of the player. If the weight of the player doesn't shift much on the box, the fireflies will grow on the tree. It will then enhance the concept of standing there, immersing in the environment, and observing nature. Hopefully, I could develop more visual feedback for the action of standing still too! That way, the player won't feel so bored with only one type of visual feedback.

'Child Dreams' by Keys of Moon Music (https://soundcloud.com/keysofmoon) is licensed under CC BY 3.0. 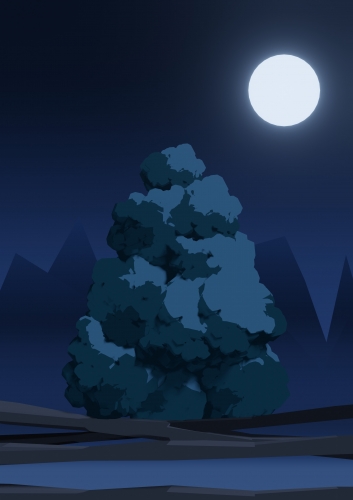