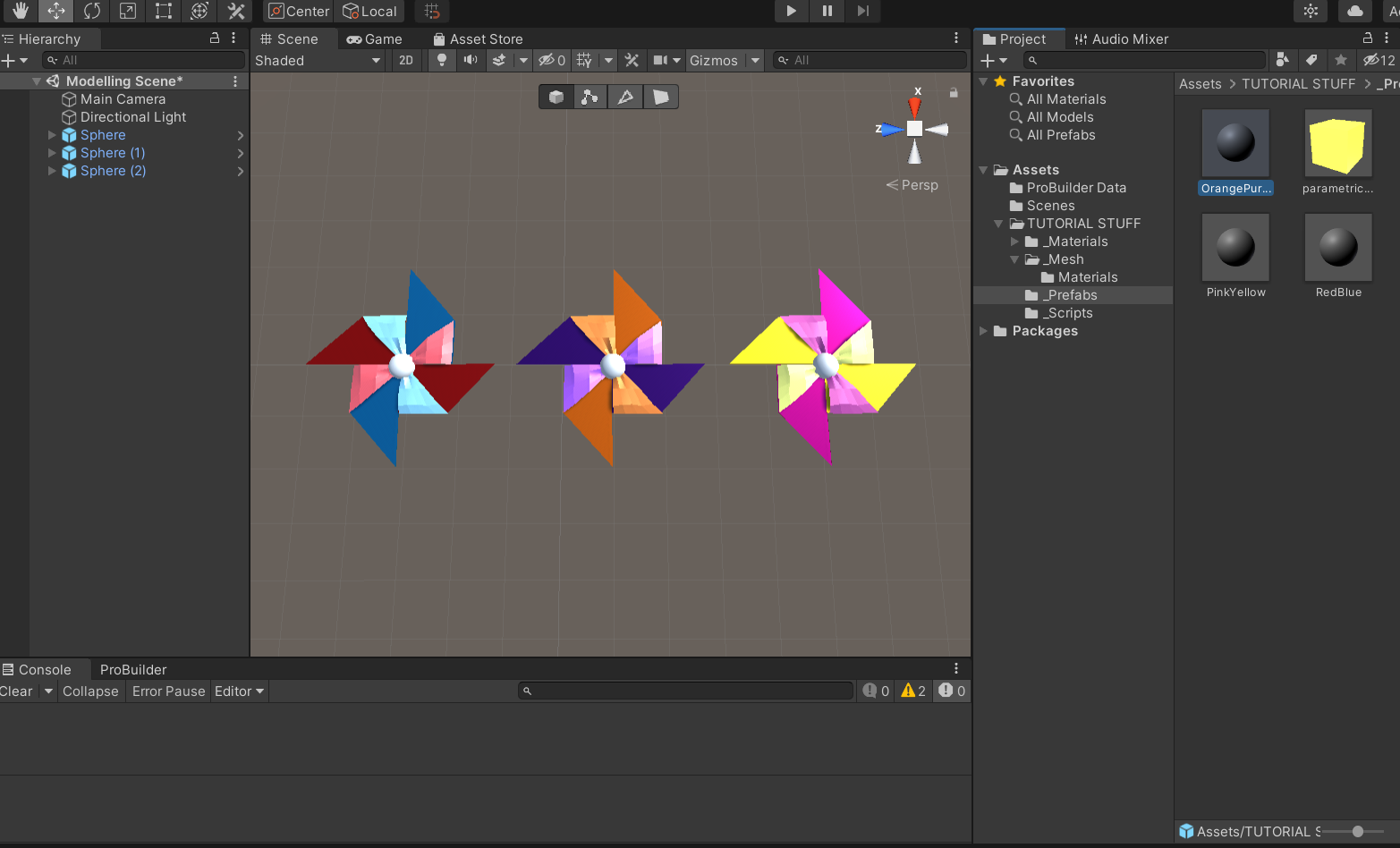 My Pinwheel Interactive can be downloaded here and runs on PC and Mac:

A Demonstration of my interactive in Motion is available here:

This week, I wanted to get back into Unity for the first time since last semester, and exercise some of my learned knowledge to keep it fresh. I was inspired by Harry (Henry) and Helia’s works from previous weeks and their technical complexity and wanted to meet that challenge in my own work.

As I began to create my interactive and really refine what effect I wanted to create, I realized as well how much I was being inspired by my memories of Vectorpark games that I researched last year, specifically the mesmerising physics, charm, simplicity and clean feeling interactivity of Feed the Head, Windosill and Metamorphabet.

While I don’t feel like I perfectly recreated that same smoothness or beauty, I do believe I was successful in creating the simple interactive I set out to make.

Tweak it into a code which rotates objects smoothly

Model pinwheels and make them children of those objects

This week I made a small interactive group of pinwheels that spin when you blow on your microphone. Last year I got really into Vectorpark games, I think because they have this hypnotically good physics engine and appealing visual design. There are several types of play present in them that attracted me and that I hoped to recreate in my interactive.

Firstly is the impulse to play with the boundaries of a simulation. The physics of Feed the Head seem so real, the audience is tempted to project their memorised rules of the ordinary world onto the simulated work and test where its limits are. One theory to explain this may be that the viewer is being shown something that bridges the gap between simulated and real and you’re enticed to find where those edges are to decide what category to put this new mental object under. While less finessed and fine tuned, I think my simulation has that same simple attractiveness for the interactor.

This leads into my second property which is the invitation to tinker, when finding boundaries, playing or solving puzzles. I find my final interactive very attractive to tinker with, to test how fast it can go with what loudness and longness of breath, and the people I have shared it with have exhibited that attraction too.

Lastly, I think I was inspired by Windosill’s aesthetic. There is something so frivolous, productless and amusing about blowing on a pinwheel. It evokes childishness and lack of worldly complexity. It is an expression of play as freedom, as in Homo Ludens: “Play is superfluous (...)  Play can be deferred or sus­pended at any time. It is never imposed by physical necessity or moral duty. It is never a task. It is done at leisure, during ‘free time’.” (Huizinga 8). I wanted to evoke this same sense of freedom in my work and was drawn to the symbol of the pinwheel because of that.

I did have several struggles when creating my interactive that weren’t entirely resolved, namely that whenever I’m coding, I’m flying by the seat of my pants through a tutorial and then making moderate changes to it where I can. For example, the tutorial I used was creating bars that rise and fall on the Y axis according to 8 bands dividing the spectrum of Hertz being processed. One problem with this is that the pinwheels respond to all sound, and while I tried to pin down exactly how to refine the input to just wind sounds, I honestly don’t yet comprehend the tools I’ll need to do that. Another issue was that Hertz naturally scales up and then back down to zero as one speaks, as a sound fades in and out. This meant that, like the tutorial’s rising bars which are supposed to scale back to zero, my pinwheels turn and then turn back, unlike real pinwheels do. I think I managed to hide this pretty well in the final project, but it still presents a coding issue for later. Both of these issues can be overcome by continuing to study the fundamentals of C# in future. Overall I still consider it a success for my first non-game 3D interactive.