***This is a collaboration work with Margaret Wong.***

The look in Unity made by Margaret: https://youtu.be/GdG_p66bnvI

Context
Animal restaurant: https://www.youtube.com/watch?v=_2zSrKDzZMk
In terms of the graphic style, I like the cute character design of this game. I can achieve the similar style as the game without using a cintiq for my animation. The final outcomes have slightly shaky lines with hand-drawn feeling as this game.
​

The Otterz: https://www.takadabear.com/character-1
My animation has the same elements of the character: simple design with a few movements. In the playful loop animation, the audience can easily understand what the character is doing.

Method
Drawing animation using wacom tablet in TV paint and Photoshop.
I designed the graphical components for unity, and Margaret was incharge of the technical parts: coding the game in Unity, connecting objects with MakeyMakey and making things work.

Response
As being a enthusiastic food lover, I wish to play with food. After watching the video of MakeyMakey, which is using different objects as keyboard or mouse, I thought now it’s the time to play with food. Margaret also have the same idea, so we decided to work together playing with gummy bear while using MakeyMakey. I play with the animation and Margaret play with Unity.
Our idea of the game is that there are gummy bears in different colors, the computer will generate their order randomly. Players have to touch the gummy bears in right order and then pick up the fork to eat them.
I asked Margaret about how unity would work in order to decide how I am going to make the animation and reduce her time on putting components in Unity. The result is that I draw three bears separately, the bears moving in the background should be in the same layer as I export the animation sequence pictures.
The initial idea is making animated gummy bear struggling in the jar, as the part of randomly generating the order of gummy bear to players. In order to make it more playful, I thought it would be really funny if the bears are doing something strange to distract players from selecting the correct sequence. It increases the difficulty of the game as players may try to watch the animation while playing.

Reflection
I love to think about the movements and had a lot of fun animating it. However, due to the time limit I could not finish the whole animation I expected to make. It suppose to be kind of messy. The bears should have run all over the screen and the number and the color of bears in the background should be way more than the current look. The less the amount of bear means the less distraction to the players. 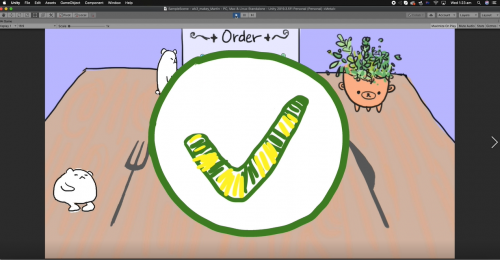 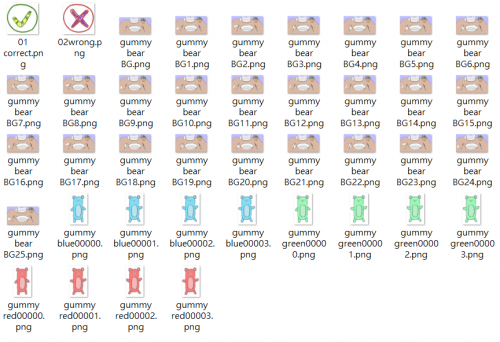 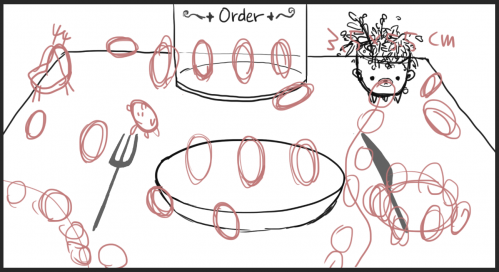 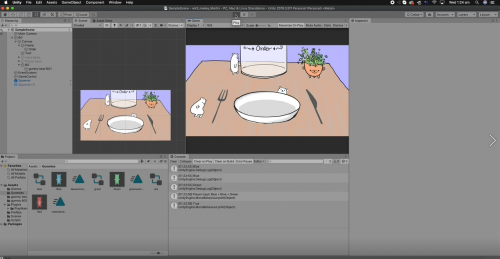