Inspired by floating lights in the air that represent previous events (Everybody's Gone to the Rapture, Plot, https://en.wikipedia.org/wiki/Everybody%27s_Gone_to_the_Rapture).

This week, I'd like to play with one of the abstractions in my Studio project where the player needs to explore and encounter certain events that occurred previously in a virtual environment (not necessarily in the same place, but in the player's mind). With this abstract idea, I investigate various objects/effects that could represent 'memories', also, these memories should differentiate from each other. Hence, I looked at various games that tinker with a similar concept and I stumbled upon 2015's video game Everybody’s Gone to the Rapture developed by The Chinese Room. The exploration in the game is guided by floating orbs of light where the player sees them and as they follow the trail, it will lead to an event that took place in the past.

I like this abstract idea of associating light with memories because memories are subconsciously stored in our mind and similar events spark these memories. The spark is the light that is captured briefly by our brain to re-enact those memories.

Let alone floating lights were not enough to deliver the idea of re-enacting memories so I incorporated specific sounds to these lights. I took 'chaos' from one of the abstract ideas from my studio project and I wanted to represent chaos through abstract light and sound floating in a place. The player can see it from the distance and hear it. As the player approaches these lights, the sound gets more noticeable. Combined, it attempts to give the feeling of 'something happened'.

I tinkered with particles in Unity (which was also another goal of this exercise). I created 4 different shapes of particles to represent separate things in chaos.

Next up is a swarm of particles that represent 'hectic'. I have kept the speed of the particles slow deliberately because I wanted to give it a feel of everyday activity where 'hectic' takes place. So I used the sound of 'traffic' to represent this idea.

Then, the twister looking particles represent 'confusion' and I used the sound of a tunnel here because I wanted to create a feeling of 'confused between choices' and usually a tunnel has two openings and we might get confused if we are suddenly spawned in a tunnel, which way to go? I also thought of a cave to represent confusion, unfortunately, the sound of the cave (wind blowing, rocks falling) did not situate well with this particle.

The last one is 'scolding' and I used the sound of people talking to represent this concept. I slowed down the speed and reduced the size of the particles, inserted a glowing sphere in the middle which represents a character and all these particles are scattered around the sphere.

All these abstracts combined, I try to evoke the feeling of chaos in the player.

I believe the idea of Abstraction is very subjective, depending on how one perceives different events in their life. I have experienced 'chaos' when I heard multiple telephones ringing, was in the middle of traffic, went outside when it was extremely windy, and was in a crown where many people were talking around me.

In my mind, the abstraction about chaos takes place mostly when I am unable to focus on one subject. I tried to recreate this experience using particles and sounds in Unity. Although it is very common in most people's lives how we perceive chaos, I expect that some of the experiences in this exercise might not be able to deliver this idea accurately.

I played with many abstract ideas in this exercise, maybe some of them are not communicated well, and tried to learn a new tool in Unity. 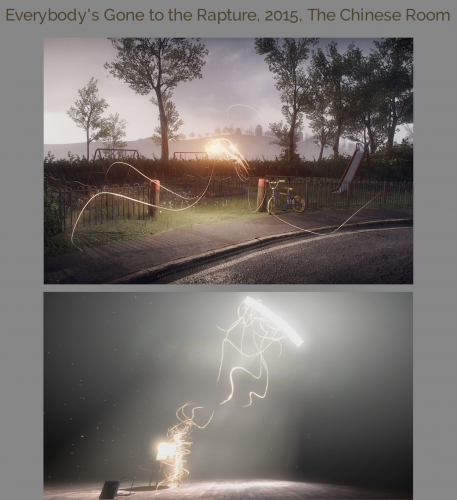