For this week’s project I decided to play with the idea of self and simulation. Baudrillard’s Simulacra and Simulations from 1981, examines the relationships between reality, symbols, and society, in particular the significations and symbolism of culture and media involved in constructing an understanding of shared existence. Simulacra are copies that depict things that either had no original, or that no longer have an original. Simulation is the imitation of the operation of a real-world process or system over time. Baudrillard claims that our current society has “replaced all reality and meaning with symbols and signs, and that human experience is of a simulation of reality.” The simulacra that Baudrillard refer to are thus the significations of how the symbolism of culture and media constructs perceived reality, the acquired understanding by which our lives and shared existence is and are rendered legible; “…Baudrillard believed that society has become so saturated with these simulacra and our lives so saturated with the constructs of society that all meaning was being rendered meaningless by being infinitely mutable.

Starting the first week’s project was definitely challenging and it made me explore a lot of ideas. I learned a lot while exploring Blender and thought about what I would like to achieve conceptually. In the first week of class I read a paper called A Study in Play, Pleasure and Interaction Design by Brigid Mary Costello and Ernest A. Emonds which I found really interesting, and it will definitely form my explorations throughout the weekly exercises in APD. According to this paper one of the pleasure principles of play is Simulation which is the pleasure of perceiving a copy or representation of something from real life... but what does that mean for me in the context of this exercise? The 3D model that I built looked very real to me (considering using only 7 photos), hence it defiantly involved the pleasure principle of simulation for me to an extent that I wanted to explore even the reflection of the face that I built, just like how a person would look at a mirror every day.

Costello, Brigid, and Ernest Edmonds. “A Study in Play, Pleasure and Interaction Design.” Proceedings of the 2007 Conference on Designing Pleasurable Products and Interfaces. ACM, 2007. 76–91. Web. 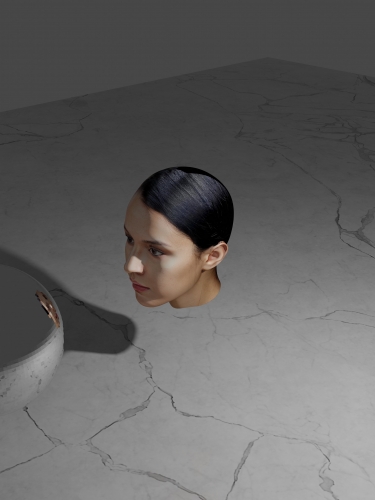