This week I was really interested in the idea of the relationship between community and place/location, and how these two things inform and influence one another. Something that has brought humans together when we were cavemen is the discovery of fire, which became an essential part of the community in providing warmth, protection and nourishment. I began by animating a fire to be a focal point for my animation, and then considered how I could show a timelapse of how community hubs and places have changed and transformed through history. This required me to research different community halls and spaces, as well as family homes. I looked to "The Making of Home" by Judith Flanders, and something that I was interested in was the idea of the hearth as the focal point of a home. Furthrermore, I was interested in how the hearth of a home has shifted from the 1950s to having a television be the hearth.

Something that I thought of was making an animate fire for the 2D club a few weeks earlier, and thought of giving that fire a character by giving it little eyes (this was inspired by the character Calcifer in Howl's Moving Castle).

The morphing interiors was the most difficult part of this project because character animation and transmutation is one skill I have, but finding ways to mutate an entire frame as an interior was new and difficult to accomplish. Something that was fantastic for me to find was how I could use straight or organic lines, and how I could use shapes to morph each interior into one another.

In terms of Play for this week's theme, I was interested in experimentation with technical skills. I made 2 separate animations, one in After Effects (the fire) and one in Animate (the morphing interiors). Even the fire animation is 2 separate animations: I made the flames in After Effects, and then animated the eyes blinking in Animate. I exported the eyes with a transparent background and overlayed the eyes on the flames in Premiere Pro. These are all different aspects of Play and experimentation that have been incorporated into my work, because I have never tried exporting with alpha channels and overlays on this kind of scale.

I've brought all of these together into my final work by exporting each animation onto transparent backgrounds, and then overlaying everything together 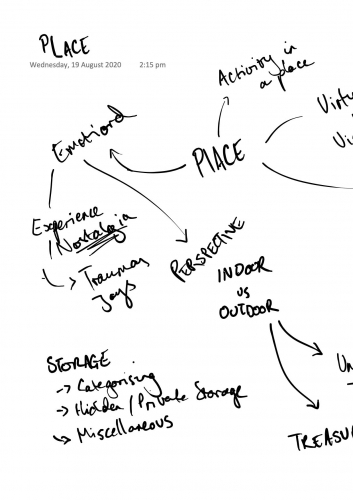