For play and place week I decided to research Marjan Moghaddam, a Brooklyn based digital artist and animator who is known for her art hacks and also her original and unique style of figuration and animation in 3D CG. She started the Art Hacks in 2016 as a way of redefining form for digital art and radicalising curation and democratising the exhibition space. From the beginning her intention wasn't just to be transgressive but to engage with the critical discourse that can be transformational. She started visually hacking her work in found exhibition footage at art fairs and museum shows and gallery shows. Her approach to her work is spontaneous and employs a free stream of consciousness.

Link to some of her works:

This week I decided to use augmented reality to activate the space that I inhabited the most during lockdown, which was my room. Firstly, I decided to make marker based augmented reality work with Vuforia and Unity to make a picture frame in my room, play Earth from Space – Earth viewing cameras ISS feed real time tracker from NASA video from Youtube. As the Vuforia plug-in allows the target to play an URL. After a day of trying to build and run the app I was unsuccessful. The program kept crashing which, might have been due to the not-so-great image target that I chose. Using Unity + Vuforia was a great experience, and I learned a lot but at the end I decided to use another augmented reality app that is more user friendly called Spark AR. I used a free 3D model of the Little Prince (my absolute favourite characters) appear from a hole that I could place anywhere around the room. As I spent a lot of time on my bed and had a lot of sleepless nights during lockdown, I decided to test the filter on my bed and recorded it.

The process was really fun, and I absolutely enjoyed putting the revolving little prince in different spots in the house, I believe augmented reality is a great way to activate a space. Although I would still like to try the initial idea that I had and see if I can make it work. Continuing my discussion on Pleasure Principles, this week’s response definitely had the aspect of Exploration. “Exploration is the pleasure participants get from exploring a situation. Because interactive artworks present participants with unfamiliar situations, all will involve some degree of exploration.” can’t say that the work had the same effect on myself as I got quite familiar with the experience as I was going through the different production stages. But when I studied the experience of the participants later on (mostly family and friends) I realised that they did achieve the pleasure Exploration. They found the experience quite engaging, most of the participants would go around the little planet so they can see it from different angles. Some did try to change the size of the planet and liked it more when it was at its maximum size. Overall, I would say I refined and developed my ideas more as I am getting familiar and more comfortable with the concept of Play and this was the very first time that I made a work that other people could also interact with it. So, it created more questions in my mind for the future projects. How does one evaluate user experience? How could I make this easier to interact with? How can I involve more than one pleasure principle in a work that I create? Etc. Lastly, there are two things that I should have also done for this project

1. Adding a sound scape to the work.

2. Filming the user interaction with the work for further study.

Costello, Brigid, and Ernest Edmonds. “A Study in Play, Pleasure and Interaction Design.” Proceedings of the 2007 Conference on Designing Pleasurable Products and Interfaces. ACM, 2007. 76–91. Web. 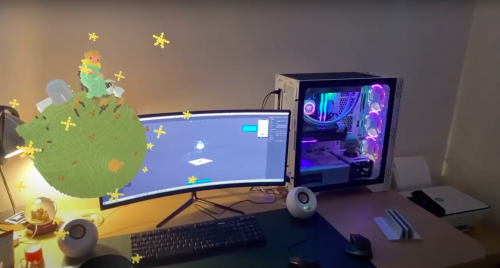