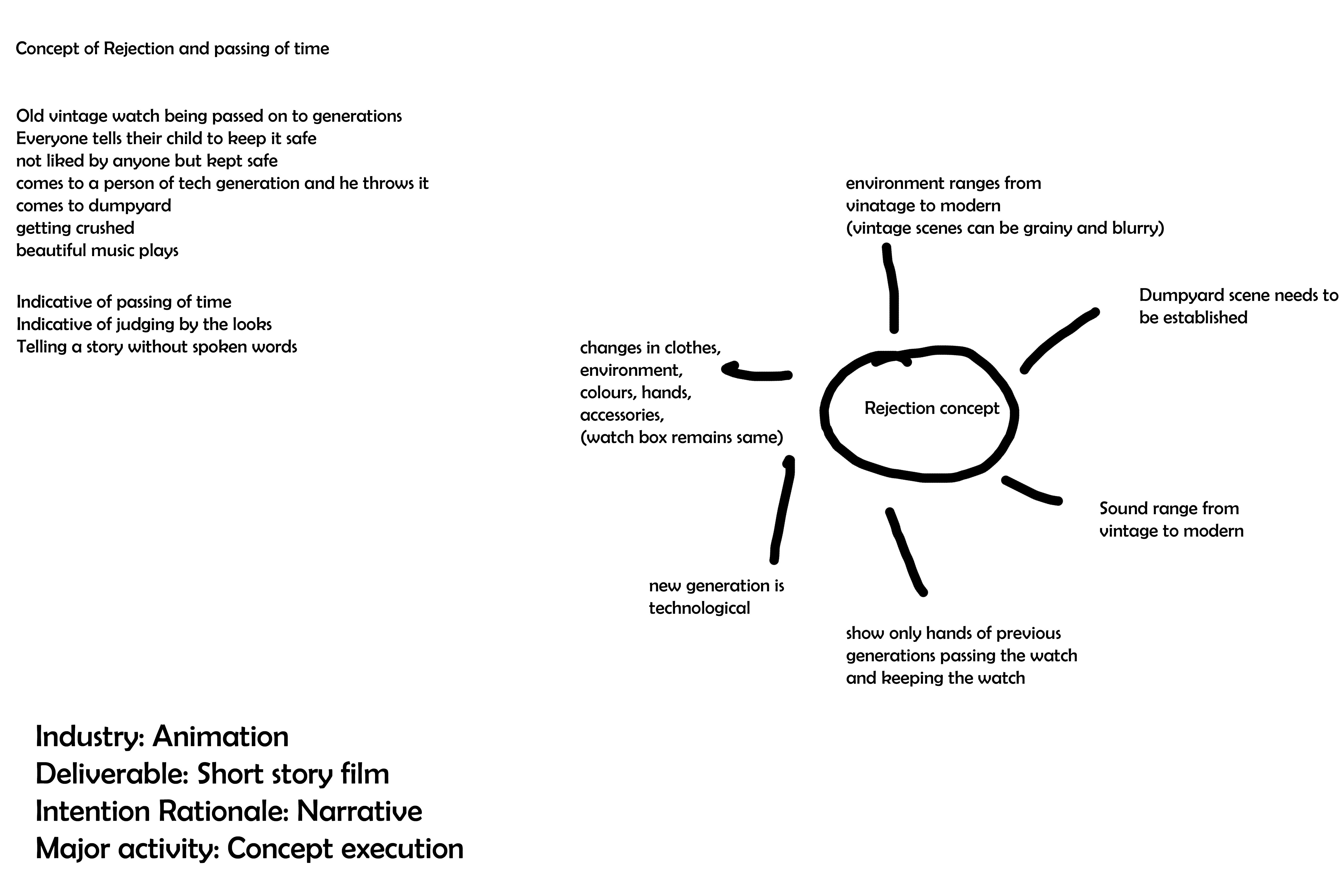 In the beginning week of studio, I had multiple concepts in mind for Studio 3 major project. I cut short my ideas and arrived on two plans, one was related to a parent-child relationship, which I had planned last semester in Professional Pre-Production. The other plan was the plan related to the concept of rejection.

After consultation with Chris, I realised that the technology plan was a really long scenario and a difficult one to manage alone in a 12-week time frame. So, in order to manage the scope, I decided to go with the concept of rejection, which had managed scope and was possible to accomplish this semester.

I created mind maps, storyline and scene breakdowns for the same concept as I consulted with our mentor, Chris. The breakdowns and storyline are attached with this post.

This week I also completed the extended writing document. The document is as follows.

With this work, I intend to explore the ideas of the feeling of rejection and the human mistake of judging something only by its physical looks and not its internal qualities.
The idea is essentially revolving around the human nature of taking everything for granted and realising its true qualities only after it is gone.
Important to the work is conveying the idea stated above to the audience effectively and evoking a feeling of empathy among the audience.
The idea will be expressed as a 3d animation.
When finished, the work will develop and communicate the concept through the 3d animation and will portray the intended emotions, of how humans take everything for granted in life and often reject the most beautiful things by only judging by the way it looks.

The reason for doing this work is to portray the importance of the smallest things and feelings in today’s era of technology, where everyone is busy and obsessed with the latest inventions and looks of everything in the world where happiness is measured by money and social status is measured by being up to date. This animation concept would help me portray the importance of being connected to one’s roots.
If successful the work will exhibit excellence in conveying human feelings without the actual use of words and helping the audience realise the importance of valuing everything because we never know what qualities something beholds without knowing that thing. It will also help me to depict that everything is beautiful and we should learn to value everything that comes to us easily.
My work will be different from existing work because it is intended to convey its message without actual spoken words. It will be different because it will help me to convey human feelings with the help of a non-living object. It would help me convey a big message to the audience without a big setup and without taking a lot of time.

Other similar works of depicting emotions through animation are being done on a huge scale by big animation houses such as Pixar animations, Walt Disney, Dreamworks etc.
Other works that deal with these concepts and ideas are of portraying rejection and emotions through a piece of animation are:
• “The Present” animation by Jacob Frey. This animation is about a young boy who is gifted a dog by his mother. The boy initially rejects the dog and does not want to play with the dog, but eventually realises its inner beauty and the joy that the dog radiates in his house and his day. The boy eventually starts liking the dog and playing with it, after he realises the importance of the dog in his life.

• “Paperman” is an animation in which a young boy is on a railway station and is waiting for his train. In the meantime, he meets the girl of his dreams. But repents after she leaves. Eventually, he tries to win her back after he sees her from his office window.
Examining the context, I can analyse and see how others have worked and displayed emotions with the help of their animations. I am particularly inspired by how the above stated examples focus on what is the most important in the animation and effectively portray the intended emotions with the characters. I am also inspired by the shot types, camera angles of the animations done by big companies. All these elements result in engagement by the audience and effective depiction of the concept.

The materials I intend to use are 3d softwares like Autodesk Maya for the construction of the 3d environment, lighting and 3d animation and substance painter and photoshop for texturing everything.
I initially plan to make a rough storyboard, and convert the storyboard into an animatic in order to achieve clarity about what the final animation is going to look and feel like. Furthermore, in the second half of the semester, where we work and create the actual animation, I will start with 3d modelling, texturing, lighting, environment creation of the whole animation. Once I finish completing the assets for the animation, I will move towards animating and finally, rendering the animation. I also intend to collaborate and work with a sound designer in order to enhance the appeal of the animation as the sound will be one of the most important elements of this work.
In order to portray the concept, I have chosen to work in the above stated workflow because creating a rough storyboard and an animatic early on is beneficial in order to have clarity with camera positions, shot angles and then moving on to the creation of the actual 3d animation. My workflow and method will allow for the best expression for the idea because using 3d as a medium to create this animation would help to enhance the visuals and bring realism to the scene. When the scene looks and feels realistic, the audience is able to connect and empathise with the animation. 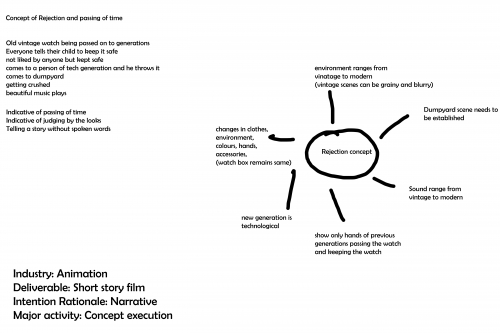 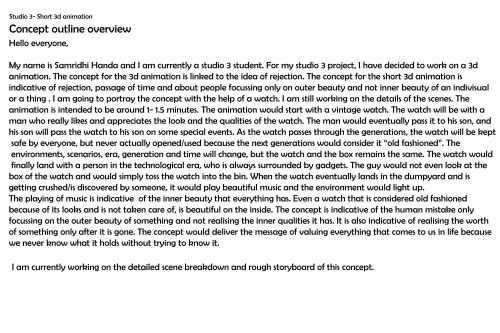 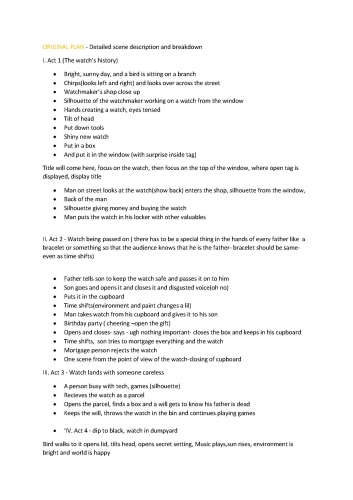 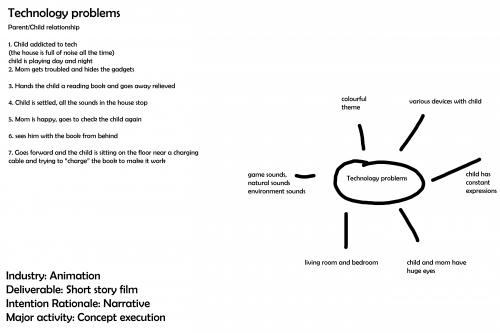