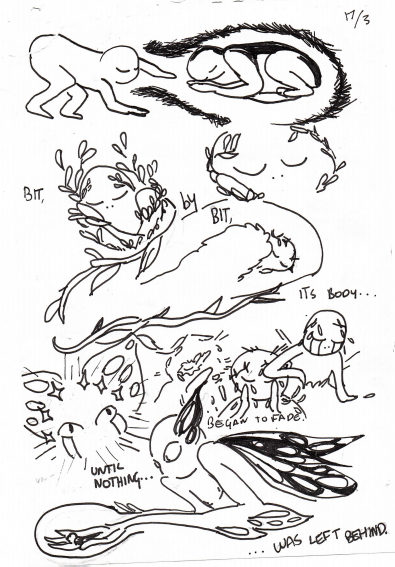 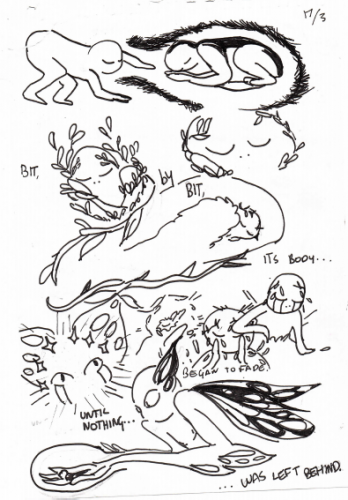 created this scene in response to the Wiki Premise: 'bit by bit, its body began to fade until nothing was left behind'.

This work explores transformation, and is about subverting usual narratives or cliches of 'change'. This is something I am interested in exploring across my work, as I like to challenge simple notions of metamorphosis, and prefer to explore challenging, surreal or slower ones.

Whilst I have presented this story scene in a format close to a comic, I think it is suited to animation as this will best capture the changes which occur in the character and add an element of time I'd like to explore. This would add an empahsis on stillness, and allow for things to be gradually revealed through camera movement.

The short film 'Puparia' by Shingo Tamagawa explores this emphasis on stillness through immersing the audience in its intricate yet unsettling visuals. I'd like to emulate a similar surreal atmosphere, and both works share this bug motif.

Whilst making this piece, I was reflecting on what I wanted to communicate by manipulating the typical imagery of a butterfly emerging. The premise used the word 'body', and I felt I wanted to emphasise aspects of the caccoon which are not typically enhanced: stillness, the deterioriation of an old body. In making the ending, I place some distance between the old and the new because I wanted to move the viewers focus from the main subject of the film, the original body. I chose this ending because I wanted to play with how often people focus on what was there before a big change in a person, even though it has happened over time, and the result after the change is so vibrant.