In Week 11 of AN, I worked on a narrative based on character and explored the concept of changing styles depending on emotion. I produced a concept of a story where the style would be responding to the character's emotions, when she feels unstable, her entire designs shifts to kind to exaggerate the negative feelings more. I really like this concept as a way to show exaggeration and think it would be fun to work with in future studios.

I initially drew up a mind map trying out different ideas such as changing colour or surrounding elements to portray the change in emotion. I finally settled on art style because I felt like it was a unique way to show a visceral reaction. More than it changing into one specific style per each emotion, I focused more on having a whole array of art styles to express one emotion; sadness; to show that the character's instability has affected her down to her very base, as a more subtle approach to the 'breaking the fourth wall' concept.

I was inspired by threesibo (who I’ve written about in my Related Works as well) and her video “making an animation with different styles”. Threesibo does experimental work that she’s inspired to do quite often, and there’s rarely any deeper meanings. However, I interpreted the meaning as being excited for a celebration and her excitement is so intense it makes her cycle through the different art styles.

Out of this week's reading I found 'The beauty of interactive stories' really useful since it's pretty much exactly the kind of path-based interactivity I'm interested in making. 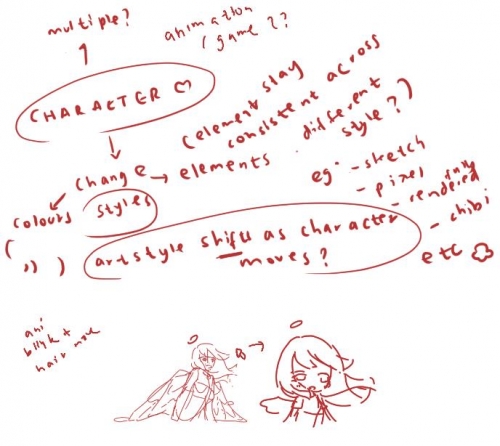