I am reposting this work to refine and improve the response and the annotation.

What have I done?

In response to this week’s topic of Advanced Play Design, which is Play and sound, I created an audio visualizer in Unity and combined it to a 3D model of a skyline. For this project, I have worked on the concept of music and feelings. I have interpreted the week’s topic to depict how the music and sound helps to provide us various perspectives. I have tried to portray how our world looks from what we hear.  For instance, when we hear music full of beats, we often feel upbeat and when we hear sad songs, we often feel sad. Therefore, the sort of sounds or music we hear affects us and the world we live in and how we perceive the world to be.

For this audio visualizer, I have worked with four various sorts of music (upbeat, cool, calm and sad). Just changing the music in the audio source, helped me get different output in terms of a new skyline. All the 3D elements in the skyline move and resize differently based on what sort of music is entered. Each type of music, helped me create a new dancing skyline depending on what the music was. Each sound resulted in a different skyline and each beat created a new view with buildings changing their positions and sizes. In this project, the music helped me visualise a skyline which is symbolic with how we perceive the world with music.

Why I have done this?

I have created a sound visualizer to interpret the weekly topic playfully and portray visually how various sorts of music affects us and the world we see. I was really interested to portray how our world looks plain and flat generally and music adds life and feelings to it. Also, the kind of music we hear, determines how we see the world. I was also interested to create a system that uses sound as an input to change our view. Therefore, in this system the sound we put in the audio source, creates a new skyline each time there is a change of sound frequency.

For the interpretation of this project, I worked with a city skyline. I first worked on the 3d models and arranged them In Maya. After they were ready, I took them to Unity. In Unity, I worked with sound sources and created scripts in order to visualise the frequency of sounds and the spectrum of sounds and interpret them into visuals in order to create the visualizer. I had to apply sound analysing script on the sound source to identify the frequency and an object scaling script on each of the object on the city skyline which worked in sync with the sound frequency identifier script and resized each object in the skyline based on the sound input.

I worked with entering four different types of sound for this project in Unity to get varied results. After creating the build in Unity, I recorded the gameplay and edited the videos using Adobe Premiere Pro and Adobe after Effects.

The whole process has been documented in a PDF, called, ‘Documentation of work’ attached with this post.

As I was really interested in creating a playful sound project and displaying how music affected our mood in various ways, I worked on creating this sound visualizer. In this sound visualizer, any sort of music can be entered and a new output can be attained in the form of a new skyline. In other words, the skyline depicts the music for this project and the skyline can be used to depict how we feel through the music we select. This provides a skyline which is satisfying to look at and something new every time a new sort of music is entered. As I studied about the framework of play theories, developed by Karl Groos, Roger callous, Mihaly Csikszentmihalyi, Michael Apter, Pierre Garneau and March Le blanc, I realised that this work belongs to the exploration and discovery framework of play as this work is more focussed on exploring and discovering a new skyline by interacting with the work. As per these frameworks of play, exploration is the pleasure participants get from exploring a situation and discovery is the pleasure participants get from making a discovery or working something out.

Therefore, I also felt that this project is a type of functional play because this sort of project uses play only to enjoy a particular type of experience and in this project, the playful user experience is more important in order to experience it.

As I worked and learnt about theories of play, I found that I can relate this project to the Recreation or Relaxation theory of Play from one of the four theories of play proposed by German poet, Moritz Lazarus in the year 1883, which suggests that play is a way to recuperate from the fatigue caused by work. I was able to relate this work to the theory as it does not involve a lot of gameplay and is only for recreational purposes. This theory suggests that play can be a way to relax and not do anything which causes tiredness and rather just provide satisfaction and calm to the person.

This project helped me learn technically, as I did not know how to make a sound visualizer. This project enabled me to create one by combining my previous knowledge and learning new one to create and combine scripts and interpret them in a creative way. This project also helped me learn conceptually as I researched and arrived at an idea of what to do for this project, as it helped me explore music and feelings and a platform to combine technical elements and conceptual elements together. Furthermore, this project also helped me learn play theories, models and frameworks of play which I was previously unaware of. I got to study these theories and relate them to my own work.

Following are the references for this project: 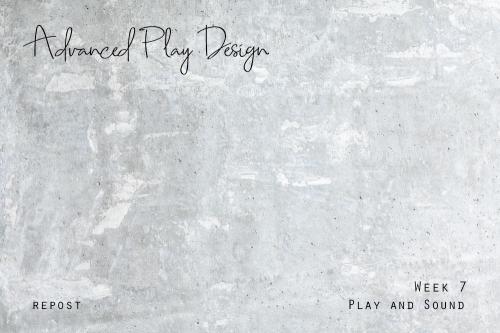