What I have done this week?

Why I have done it this week?

I have worked on this concept this week, because the topic play and stillness reminded me of balance. In order to balance something one needs to be still. Therefore, balance is one idea associated with stillness. I decided to work on this idea. I also researched and contemplated how balance could be used to create a playful response in terms of stillness. As I researched, studied and made mind map for the topic, I realised that balance is very often observed in day to day life and even other than balance, there are situations where humans are required to remain still. For instance, when someone tries to playfully balance a ball or books on their head, or when a butterfly lands on someone’s hands, a person needs to be still in order to maintain and keep that there. With these observations, coupled with research, I arrived at a conclusion to create a screenshot game where the objects are moving endlessly and the user needs to screenshot when the object arrives at the required position.

As I researched before creating this and working on this topic, I got inspiration. Most of my inspiration for the response of this week were games related to balance, both traditional games and video games. Some of my inspirations are defined below:

In order to work for this week’s response, I found pictures online where people were trying to balance something on various parts of their body like their head, hand, and nose. I also found pictures of various objects and various body parts. I took these pictures to Photoshop and edited them in order to make them look like the person present in the picture is preparing themselves to balance something on them. I separated the objects pictures in Photoshop only. Then after the pictures were ready, I took everything to Adobe After Effects and put the people’s pictures static and set the objects in motion. In after effects, I rendered things one by one. Furthermore, I took all the clips to premiere pro and looped them all. After the video was set, I even added background music and titles explain what the player is supposed to do and where the player is supposed to try to screenshot to place the object properly.

I feel this project has been amusing to me and is a playful response because I found a chance to tinker and explore here. Additionally, I feel that this is a bit challenging in terms of taking the screenshot at the right position and it is fun to me because I have been trying over and over again to bring it to the right position. Therefore, I believe that this work belongs to discovery, exploration and difficulty frameworks of play developed in the nineteenth century.

This project helped me develop my technical and conceptual skills as It helped me think out of the box for the weekly topic and work in newer ways after I researched.

As I read about Fagen’s categories of Play, I could relate my work to the second category of his work, which is non-contact solo play and the social play of moving bodies through space. As this project does not require many people to play together.

I could also relate this work to relaxation and recreation theory, as this work does require much strain, little challenge and is the main purpose only to relax the person and provide rejuvenation and a satisfaction to the person who plays it, as very rightly mentioned by Miguel Sicart in the book, Play Matters:

“And Play is not necessarily fun. It is pleasurable, but the pleasure it creates are not always submissive to enjoyment, happiness or positive traits. Play can be pleasureable when it hurts, offends, challenges us or teases us and even when we are not playing.” 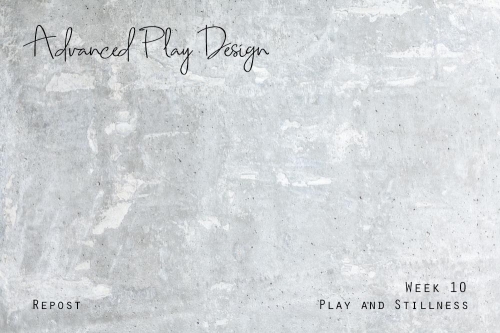