According to the 'forces', I started to struggling with some physic concept projects, as it shown in the class, there are a lot of projects based on mathmatics or physics, which is beyond the reach of my knowledge, so I decided to do some simulation as a prototype of a project, I did a lot of research before doing it.

The first research is about an architecture which creates possibilities for interactivity, "It's a spring made out of steel, which basically flexes open in response to the weight of your step," the designer explained. This is a device based on the concept of creating intricate architectural intallations that respond to the bodies of visitors.

'This process allows the designer to realise environments that exemplify the principle that people should be able to interact with the spaces they occupy.'

The second research is about a human-powered helicopter(Human-Powered Helicopter: Straight Up Difficult), which is a machine produced by Maggie Starbard, Correspondent, Adam Cole, Senior Editor and Ben De La Cruz, they built a working four-rotor helicopter that spans 100 feet and only weighs 80 pounds.It's even harder when the engine is a 0.7-horsepower person. But one team of engineering students is trying to do just that. In this project, the experimentalists should keep pushing the wheels of the machine to make it fly.

There is a video about conservation of momentum demonstrations, it shows Newton's Cradle Elastic Collisions.

It's my understand that most of them are related to Mechanics, which is hard for me to do a whole experiment or project based on them, I chose to do a project related to the gravity, which can be used in game designs.

At first I was doing a balance beam game simulation related to gravity, which could further developed as a small stand-alone games. Its operation is very simple, you only need to control the falling object to achieve balance, if the objects fall, then game over, you need to do it again.

After finishing the prototype of this project, I turned to do another project related to gravity, which is more interesting than this one.

I focused on the Pendulum Waves  and started to do a experiment in Blender, at first I  created the objects,  following the tutorials that helps me with how to use Blender I made the model of the pendulum, it takes times for me to understand the operation in Blender, then I started to set the key frame, the position and movement of the camera, after adding some textures then it was finished. I think the key to this is to set the movement of the camera, which should simulate the movement of players.

'Sometimes, physics can be used to create beautiful art. Kinetic art is art that relies on motion to achieve a specific effect. Often that motion is just an application of simple laws of physics. Waves and harmonic motion (some examples include pendulums and springs) are often great sources of inspiration for creating mesmerizing displays.

In this project, you will use the laws of simple pendulum motion to create a “pendulum wave apparatus”: a device where many pendulums of different lengths (and therefore different periods) start swinging at the same time. As they move in and out of sync, the pendulums create a sequence of cycling visual wave patterns.'

Here is the final output of this project, it's a simulation of a play level in game design, players should pass quickly before the pendulum falls, it requires the players to have a good control over the speed. It's a prototype which is not achived, I think it is a good direction for a further development on a game design.

I have not learned how to set the camera shake yet, which is in order to simulate the movement state of the players in the first perspective more realistically in game designs, it's not difficult to do on this and I will try to achieve it when I do the projects in future works. 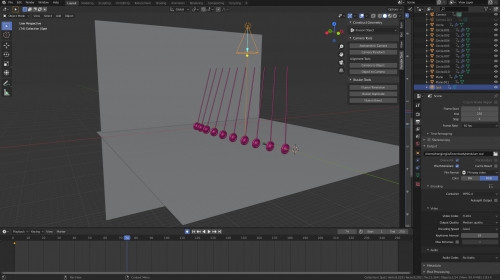